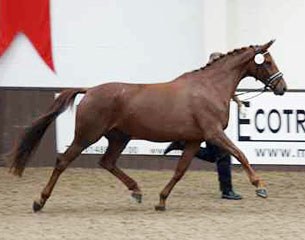 Dancing Queen (by Davignon I x Lemon Tree x Akzent II x Hessenstein) is bred by Jens-Friedrich Langrehr in Germany and owned by Chris and Nikki Lawton. A whole team was behind her victory in the mare championship class and supreme championship class.

"We purchased her as a 3 year old from Woodcroft Stud, who have been superb in every way. Both Tim and Bernadette have always been on hand to help, assist and advise when required. The professional way that Dancer was shown to the judges was a credit to them. Poor Tim had to make at least six flying laps around the area with our girl after winning her classes for 6 year old mare, overall mare and Supreme Champion. We can never thank you enough," said Chris and Nikki Lawton. 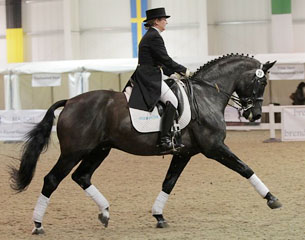 Eleven mares were presented for the mares performance test. HRH Lady Equites (by His Highness) owned by Vanessa Vernon had the highest dressage talented marks. Elaine of Westoak (by Elroon) stood out with her very trainable, quiet character and was smooth in all her paces. She won the material class for ridden 3-year olds.