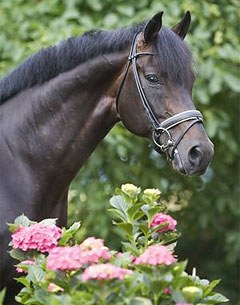 The 13-year old Westfalian licensed stallion Future (by Florestan x Apart) has been added to the line-up of auction horses for the 2011 Equine Elite Future Stars auction held at Stable Korenbloem in Weert, The Netherlands, on 5 November 2011.

The drop dead gorgeous bay stallion has been trained and competed at S-level and makes an outstanding small tour horse. He has been professionally trained, initially by Sven Rothenberger and later on at Coby van Baalen's dressage stable in The Netherlands.

Future is approved for Rhineland, Westfalen, Oldenburg and Berlin-Brandenburg and has sired numerous licensed sons and successful offspring, including Freckle who finished third at the 2011 Bundeschampionate in Warendorf.

Future is a wild card submission to the 2011 Equine Elite Young Stars auction and will be sold at auction under the condition that he will be released by the court as this stallion has been legally confiscated after a lease was ended and the leaser refused to return the horse.