Research on the Attractiveness of Photos for Equestrian Advertisements 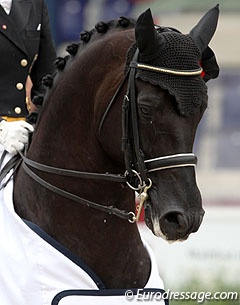 "What you see is what you get: investigating attractiveness of equine photographs" is the research study Inga Wolframm and M. Schaudt conducted for the University of Applied Sciences in Wageningen, The Netherlands. The main conclusion was that "regardless of intent to buy, the most important areas of visual attention in an equine photograph are eyes, mouth and ears."

In the abstract for the 2011 ISES conference, Wolframm and Schaudt summarize their study as follows:

Advertisements to sell horses via the internet or print media are almost always accompanied by photographs. It is assumed that a realistic representation of the horse is likely to entice the buyer into coming to try, and ultimately buy, the horse. Yet little empirical evidence exists identifying what type of photograph attracts potential buyers, nor what they pay attention to when looking at equine photographs.

The aim of the current study was to investigate what type of photographs potential buyers find attractive and what elements in a photograph they focus on. A questionnaire was designed depicting 25 equine photographs commonly used when selling horses. The photographs were divided into three groups: action photos, head shots or side-on photographs.

Twenty-one equine enthusiasts were asked to rate the attractiveness of each horse on a scale from 1 (not attractive at all) to 10 (extremely attractive) and subsequently decide whether they would consider buying the horse, assuming they were looking to buy. While completing the questionnaire, all participants had their eye movement recorded using the eye-tracker Tobii T60 XL. The visual attention data gained from the eye tracker were analysed using descriptive statistics for each group of photos.

Findings seem to indicate that regardless of intent to buy, the most important areas of visual attention in an equine photograph are eyes, mouth and ears.

Qualitative analysis of the photographs considered most attractive showed that the horses depicted all had pricked ears, an alert expression, and a mouth devoid of tension.

Practical implications are that when trying to sell a horse, the seller should take care to capture eyes, ears and mouth to express attention, alertness and freedom from tension.