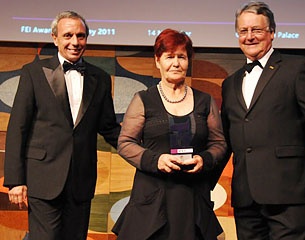 FEI Best Groom Award 2011 winner Alice Gaillard believes there are many grooms who deserve to be nominated for their work behind the scenes and have the chance to enjoy what she remembers as  “a dream experience” at the FEI Awards ceremony, which will this year take place in Istanbul (TUR).

The 76-year-old has groomed at the French Equestrian Federation-accredited centre L’Etrier de Bourgogne in Dijon (FRA) for five decades, an activity that, for many years, she juggled with her job as a mechanic at a mustard factory.  Her reputed gift with horses led her to work for  Eventing rider Marie-Christine Duroy at the Olympic Games in 1988, 1992 and 1996, as well as for Jean Teulère at the FEI World Equestrian Games™ in 2002.

“I didn’t know that people could win awards for doing what they love," said Gaillard, who was incredulous when she was informed she had won.  "Owners and riders should show they realise that their grooms willingly make sacrifices out of their love for horses and nominate them for the FEI Best Groom Award.”

Gaillard stlll grooms nearly every day and is the last person to leave the equestrian centre in Dijon.  “I never want to go home  until I’ve gone round the stables a last time to make sure all the horses are well,” she said. “I just wouldn’t feel right if I didn’t do that and I know there are a lot of young grooms who feel the same.”

Gaillard, who said that assisting veterinarian was the part of her work she enjoyed the most, has seen conditions for grooms improve considerably over the years. " Riders have a lot more respect for their grooms now and look after their well-being," she said. " When they have good grooms, they want to keep them."

The dedicated horse-carer said she often talks to young grooms about winning her award and tells them she hopes they will one day have the chance to experience the same pleasure.

"You can’t imagine how much it meant to me, at my age, to travel to Rio de Janeiro for the award and be pampered," she said. "Everyone was very kind to me - it was a wonderful experience."

Nominations for the five categories of the FEI Awards can be made at: www.feiawards.org.