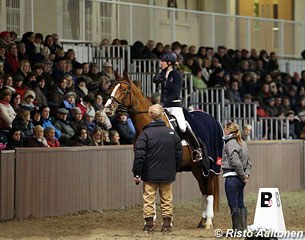 On a cold and snowy January evening in Buckinghamshire, dressage fans braved the weather and turned out in their hundreds to Addington Manor to watch a demonstration by Olympic gold medallist, Laura Bechtolsheimer. While the outside temperature was low, Laura and Wilfried Bechtolsheimer warmed the crowds with their informative demonstration.

Laura and Dr Bechtolsheimer were keen to explain their work ethic for the horses. How they use the same methodology, techniques and suppling exercises, including shoulder in, travers, renvers and half pass, no matter what level the horse is, always keeping in mind the basic  scales of training, and especially working towards self-carriage and lightness.

Laura started out the evening riding Pammy, who was a little overcome by her surroundings at first but as soon as Laura put her to work she showed off her future potential to the full. There were some amusing moments when stable jockey Lara Griffith and Dr Bechtolsheimer, explained how both of them had been bucked off several times by Pammy but after coming back into work following some field time she seemed to be keeping all four feet on the ground and was now progressing in her work. 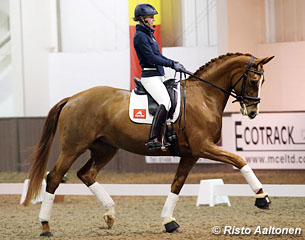 Next Lara came in on Rufus. It was explained that Rufus had recently been brought back into work following a back injury. The same routine was used to warm him up and then some more advanced work was shown and how Rufus was being prepared for the movements at the higher levels, such as two time changes and pirouettes. Dr Bechtolsheimer explained that during the training sessions the more strenuous movements such as pirouettes, piaffe and extended trot, were kept to a minimum and ‘watered down’ so as not to put too much strain on the joints.

Lastly, but definitely not least, Laura returned to the arena on a very fit and lively Alf. He is well known for being full of exuberance and very strong at times but he behaved impeccably and it was almost as though he were showing off for the enraptured crowd. Laura put him through the same warmup routine, the only difference being that she warms him up in canter and said that every horse is different and changes are made to suit. Then she put him through his paces and produced some near perfect piaffe, passage and zig zag, which were very impressive as this was the first time he had been out since the Olympics. Surely at this point there was not a single person in the audience who wouldn’t have given their right arm just to have a sit on that horse! Laura mentioned that this would be Alf’s last competitive season and afterwards the writer asked her what would happen to him then, Laura laughed and said she wasn’t sure as she agreed he definitely doesn’t look ready for the field just yet.

The evening was very informative and enlightening. It was a pleasure to see that the traditional classical methods of training are still proving to be and produce the best.