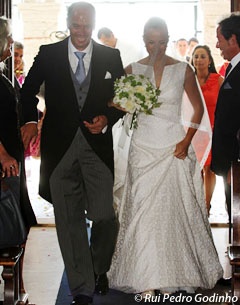 Portuguese Grand Prix team member Maria Moura Caetano got married to Fernando Mouzinho Couceiro in a lavish wedding ceremony on Saturday 14 September 2013. The 26-year old Maria and the 32-year old Fernando married at the Igreja Paroquial de Santo António do Estoril and celebrated their union with a reception at the Palacio Hotel in Estoril. Fernando is a successful farmer and has a huge agricultural and breeding business in Portalegre. In his leasure time he is also a doma vaquera rider.

Paula Vorwerk has passed away at the grand age of 91. She and her husband Georg Vorwerk were visionaries and established one of the leading dressage stallion stations in the Oldenburg area, Gestut Vorwerk in Cappeln. She and her husband acquired legendary stallions such as Furioso II, Inschallah AA as well as the jumper Zeus and stood Rubinstein I, which were all foundation sires in their own right. 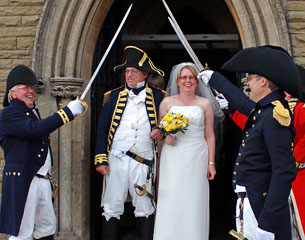 Simon Fry, husband of the late British Grand Prix rider Laura Fry, has remarried his and Laura's long-time friend Julie Langlands on 31 August 2013 at Beswick Church in the presence of his family and friends. Simon was dressed as Napoleon at the fun filled wedding.

Wild Child, the first born foal out of double Young Horse World Champion Woodlander Farouche, has been accepted for breeding by the Hanoverian society. At the annual British Hanoverian stallion grading in the College in Keysoe, judges Jurgen Rump and Martin Klintworth approved Wild Child as the only one from the group presented. Wild Child is by Wavavoom (by Weltregent x Longchamp).

Olympic champion Charlotte Dujardin got a taste of what British paparazzi are really like now that she's a national star. The 28-year old got snapped on holiday in Barbados in her bikini with fiance Dean Golding.

Belgian team rider and kur finalist at the 2013 European Championships, Claudia Fassaert, went on a short holiday to Ibiza after the outdoor show season came to a close.