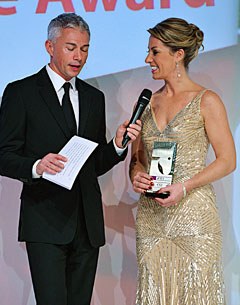 Charlotte Dujardin has been named Athlete of the Year at the 2013 FEI Awards, which were held on the concluding day of the 2013 FEI General Assembly in Montreux, Switzerland, on Thursday 7 November 2013.  She received the "Reem Acra Best Athlete" prize and she is already the third dressage rider out of five to have won the Best Athlete title since the inception of the FEI awards in 2009.

HRH Princess Haya, President of the Fédération Equestre Internationale (FEI) led the applause tonight as the five winners of the FEI Awards 2013 went on stage in Montreux, Switzerland to receive their honours.

Master of Ceremonies Jonathan Edwards, Olympic gold medallist in Triple Jump and the current world record holder, described the accomplishments of the recipients of the FEI Awards to more than three hundred guests, including representatives of the 132 Member Federations of the FEI - the world governing body of horse sport - journalists, VIPs, friends of the winners and FEI staff.

Against All Odds
Joann Formosa (AUS)

Before the winners were announced and called on stage, HRH Princess Haya acknowledged Paralympian Joann Formosa, Olympic double gold medallist Charlotte Dujardin and Reed Kessler – the youngest equestrian athlete to compete at London 2012 - and thanked them “for sharing the grace, elegance and beauty of equestrian sport with a global audience.” HRH Princess Haya added: “Since competing at the Games, they have continued to confirm their talent and inspire a future generation of equestrians.”

The FEI President referred to Best Groom Award winner Carmen Thiemann as “a real credit to her profession and an inspiration to her peers”. Commenting on the National Army Riding School of Uruguay, she spoke of the “extraordinary breadth and scope of its activities” and said the efforts the school had put into developing equestrian sport were “exemplary”.

All the winners were flown to Switzerland courtesy of Carlson Wagonlit Travel. 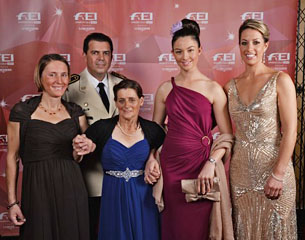 The years 2012 and 2013 will certainly remain engraved on Reed Kessler’s memory.  In her first year of eligibility in the senior Jumping ranks, she shared the 2012 USEF National Jumping title with the legendary Olympian Margie Engle.  A few months later, shortly after her 18th birthday, Reed headed to London as the youngest equestrian athlete to compete at the Olympic Games.

Early 2013 saw Reed achieve top results over twelve weeks of competition at the FTI Consulting Winter Equestrian Festival in Wellington, USA, where she rode a double clear on her Olympic mount Cylana at the Furusiyya FEI Nations Cup™ Jumping and contributed to Team USA’s victory. She also competed at the FEI World Cup™ Jumping Final in Gothenburg, Sweden and finished in 10th position. At Spruce Meadows, Canada, she again represented the USA in the Furusiyya FEI Nations Cup™ Jumping then claimed her biggest victory to date in the ATCO Power Queen Elizabeth II Cup.

Charlotte Dujardin’s individual gold medal-winning performance at London 2012 will be remembered for its excellence and its contribution to Team Great Britain’s first Dressage glory in Olympic history.

From 2003, Charlotte worked for Dressage trainer, International Grand Prix rider and Judge Judy Harvey. In 2007, Dressage lessons with Carl Hester – her future mentor and Olympic teammate - led to a job at his yard. She later teamed up the Dutch Warmblood gelding Valegro he co-owned with Roly Luard. Charlotte and Valegro competed at their first Grand Prix event in 2011 and, the same year, became part of the gold medal-winning team at the FEI European Dressage Championship.

August’s Blue Hors FEI European Dressage Championships in Herning (DEN) saw the magical duo take home team bronze in the Grand Prix and individual gold in the Grand Prix Special and Freestyle. The same month, they moved into the number one spot of the FEI World Dressage Rankings, a position Charlotte had already held seven times.

Carmen Thiemann is fully responsible for managing Olympic Eventing gold medallist Ingrid Klimke’s yard and is described as “the very soul of the stable”. Ingrid says it is Carmen’s great competence that allows her to focus on her own work with the horses.

A holiday Carmen spent at a yard when she was 12 prompted her to find stables near her home where she could take care of ponies. She left school at 17 and worked for the legendary Dr Reiner Klimke - winner of six gold and two bronze Olympic Dressage medals - for eight years. During that time, she worked for Dr Klimke’s daughter too and when Ingrid left the yard in 1990, she invited Carmen to go with her.  Twenty-three years, four Olympic Games and a multitude of other competitions later, Carmen’s loyalty and professionalism were acknowledged by more than a hundred nominations for the FEI’s Best Groom Award, all lauding her calmness, kindness, reliability, excellent organisational skills and positive attitude. 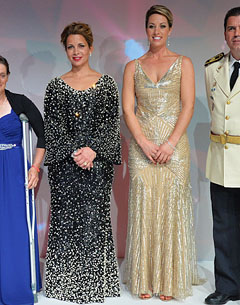 The National Army Riding School of Uruguay was founded in 1948 to improve equestrian instruction in the army but its activities quickly diversified. The school organises more than 20 national and international Jumping, Dressage, Para-Equestrian Dressage, Eventing and Vaulting competitions annually, as well as competitions within Special Olympics programmes. Horse welfare and Vaulting play an important role in social integration programmes for underprivileged teenagers and their families that it works on with NGOs, institutions and youth centres.

The National Army Riding School is the only institution to grant national riding instructor qualifications and its courses are attended by more than 150 students. Others participate in seminars and clinics organised in the context of the Uruguayan Equestrian Federation’s National Teaching Programme and FEI development courses.

Grito de Asencio is affiliated to the National Centre for Equestrian Development and Rehabilitation and offers its resources and facilities to students with psychological, cognitive and physical disabilities free of charge.

Against All Odds
Joann Formosa (AUS)

Joann Formosa started competing in Dressage and Jumping events in 1980 and dreamed of representing Australia. Fate took a cruel twist in 1987, when she was crushed between a gatepost and a horse, severely damaging her central nervous system.

Reluctantly at first, Joann attended a Riding for the Disabled Association centre. Her passion and determination were rekindled but, in 2000, a second accident left her with limited leg movement. Against all odds, she made her national team debut at the FEI World Equestrian Games™ 2006 and joined Australia’s 2009 National High Performance Squad. The year 2011 brought Joann her stallion Worldwide PB and the beginning of their training at the Australian Equine Behaviour Centre. The same year, they finished first in the Grade 1B category of the National Championship and clinched triple gold at the Oceania Championships. Joann’s dream-come-true gold medal win at the 2012 Paralympics was rewarded by Equestrian Australia’s International Athlete of the Year Award.