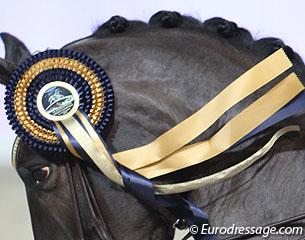 On Saturday 18 January 2014 Eurodressage received its 100,000th like on its highly popular Facebook page. I must confess it was one of my secret goals to establish a Facebook community that big and I'm incredibly proud and grateful that it came about so quickly.

At the 2013 European Championships in Herning, the counter was around 28,000 approximately and something must have cliqued right after that show because the Facebook likes went through the roof since then. Within five months times, we tripled our likes and the counter hasn't stopped ticking! As far as we know Eurodressage has the largest Facebook community of all online equestrian websites which only cover one discipline! We are bigger than magazines that have existed for almost 100 years without spending a single penny on advertisement and propaganda, ever!

Facebook has become an integral tool in the mediatization of Eurodressage. We deliberately choose not to give the option to comment on articles on Eurodressage itself, but want to channell readers to Facebook where they have the platform to share and discuss our daily stories.

I often get asked if the visitor rate on Eurodressage hasn't dropped because of the success of Facebook, but it hasn't! Our visitor rates have only increased year after year with a loyal audience of more than 80% that logs onto Eurodressage daily, directly via the URL and not via a search engine nor Facebook. "Eurodressage and a cop of coffee in the morning," is what I hear the most!

While I'm taking this weekend slow, struck flat out by a nasty case of the flu, I do celebrate this success horizontally with this quick message of gratitude to my loyal readers and contributors! Thank you all !

Let's make 2014 bigger and better than ever!