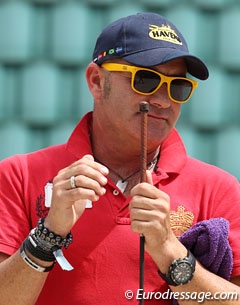 Almost two decades ago Robbie Sanderson was looking for a new path in life and having always been in love with horses, he jumped at the chance to work for a young Spanish talent who needed a groom to help her reach her dressage goals. That talent turned out to be Olympic bronze medal winning Beatriz Ferrer-Salat and Sanderson has never left her.

“When I started out as a groom, Beatriz Ferrer Salat was just starting her career,” said 45-year old Robbie Sanderson. “We grew together, we became great together, I am so lucky to have the rider that I have, as a great groom not only needs to respect and love horses, they must also respect their rider, and understand their rider as well as they understand their horses.”

Working with Beatriz for over 15 years, Robbie took a brief four year glimpse of working life in the US in the middle, but returned to Beatriz and her stable in Barcelona. Together the pair has travelled around the world, competed at three Olympics, attanded one as a reserve, on top of two World Equestrian Games. They have worked together to become great at doing what they love.

“I also enjoy riding, but I do enjoy more the grooming,” Robbie told Eurodressage. “I see the people that ride and groom and I feel that they don’t really give the horses the attention they need. I need to know the horses inside and out, I need to know if they are peeing and eating, and more than that, the horses need love.”

Very happy to be with a rider who also has a strong connection with her horses, Robbie knows that a top groom also needs to be on the same wavelength with the rider. The groom needs to be capable of keeping his cool in any situation.

"A groom is everything: the agony arm, the karma, they must take everybody’s crap, they have to be the strongest person in the team to keep everybody else together. Above all they have to be able to stand in front of a bullet to protect their horses," Sanderson said frankly. 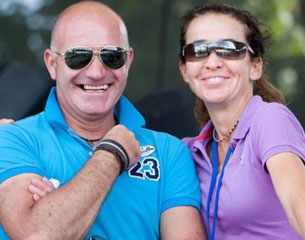 A groom, according to Robbie, must also be blessed with a very thick skin and perhaps be a little more outgoing than your average horsey person. “You can’t ever whinge or think someone is talking about you and you really have to believe in yourself," Robbie stated.  "More than that you have to get along and communicate well with everyone and the trust between groom, vet, rider, and farrier is essential!”

With many highlights during his travels, Robbie remembers when Beatriz beat Rusty to win the Special at the World Equestrian Games in 2002. He also enjoyed his time down under, living it up in Groom A class in Sydney. “In Sydney the grooms were together for over 8 weeks and everybody became really good friends," he said. "I love it when we have dressage with the jumping, as the dressage grooms, well some of them think they are a little bit special, and they can’t possibly mix with the others. Jumping grooms are so much more fun, but I do have a great group in the dressage world and luckily we have a lot of fun ourselves."

Not always do the riders dictate the rules, but sometimes the grooms are in charge of the schedule. "I remember the time that Alan Davies and I gave our riders an ultimatum at the World Games in Spain," Robbie reminsced. "You must ride either before 11am or after 1pm because the grooms had been given access to the pool, and and at 11am Alan and I had our spot picked out, ready to watch the vaulting boys in training, speedos and all!” 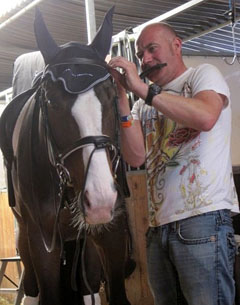 While the life of a groom is 24/7 Robbie feels that it is important for grooms to also let loose and have some fun, as much for their horses as for their own sanity. “The grooms that don’t have a little fun treat the horse horribly and the ones that are fun and enjoy life, have horses that are loved and happy too," he confessed. "Sometimes I feel like just telling them, 'Please just go and have some fun'.  If you yourself are not frustrated, you have a lot more patience, because horses really get nervous too, and while of course I also get nervous, you have to learn to handle the pressure.”

It is a hard life, a hard working life, Robbie admitted, but the long hours get rewarded with proper time off as well. However, it is the contact with the animal and being part of something great, that makes it all worth while. “Everybody knows that the top grooms work bloody hard twenty four seven, even when we are out letting loose we are still thinking, you can’t relax, you have to be always on the job," said Robbie. "I have been training another groom for over a year and only now can I control myself to not go into the stable on my day off just to check all is well."

When asked what Robbie's best grooming tip is, he replied that it is not only to always be learning from your own horse and rider, but also to look around you and to keep your eye on other grooms, for what they might be doing better than you. “I pick up lots from the eventing grooms particularly," he said. "At the Olympics I spoke to a few eventers to ask them who the best grooms here were, and they said the kiwi’s, so I became friends with them!" 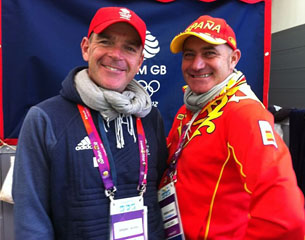 Known as the man with the machines, Robbie has travelled the world with ice wraps and bubble bags, and says the secret to keeping your horse super fit is to always maintain the circulation, and if you can invest in an equi spa. “It was Patrik Kittel who walked up to me one day at a show and said I needed a horse spa. Best advice I was ever given and now all the horses go to the spa for their relax time," said Sanderson. " How an international stable can run without a spa I cannot tell you. It’s like going into the sea and it keeps the horse's legs absolutely like a three year old. I wish I could do the same for my face. After a hard day training, the horses hop in and you can see them saying “Ahhhh thank you, thank you, thank you'!"

Able to plait from day one, Robbie was given a demo by a Spanish rider on how to do the spanish braid and straight away he could do it better than the demo version. “I've always naturally done it. If you can plait, you can groom.”

The look on the horse's face is all Robbie needs to to tell how his horses are feeling. The constant monitoring of what goes in and out is part of a groom's life.  “A groom must check the pee and droppings everyday, to know what to adjust," he said. "It is very important to muck out yourself or you miss things, have they been rolling, etc”

Finally, how to make that horse really shine out in the arena? “It’s called elbow grease, and lots of it!”