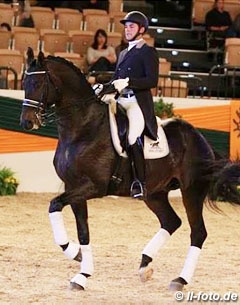 The 11-year old licensed stallion Easy Game has been proclaimed Elite Stallion at the 2014 Trakehner Stallion Licensing in Neumunster, Germany, on Thursday 16 October 2014. Easy Game is bred by Filip Willemsen and owned by Petra Wilm and Joop van Uytert.

Petra Wilm, the president of the German Trakehner Society, seems to be taking centre stage this year at the 2014 Licensing. Not only has her Grand Prix horse King Arthur TSF been proclaimed Trakehner Stallion of the Year, but her Easy Game is also named Elite Stallion this year.

Easy Game was presented at the 2014 Licensing in a show by Dutch John Tyssen. The stallion was initially ridden by Jan Lens and then Theo Hanzon but John Tyssen has taken over the ride a while ago. The dark bay stallion has done some shows in Holland at fourth and small tour level but he never competed internationally.