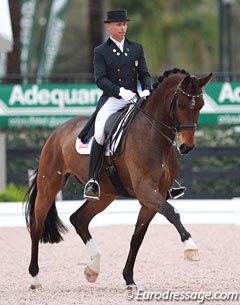 American team anchor Steffen Peters was able to the draw the crowds to the Wellington show grounds for the presentation of his rising star Rosamunde in her first international Grand Prix class on Thursday 5 February 2015. The morning CDI 3* Grand Prix was delayed for four hours after a torrential downpour and thunderstorms made competition outdoor impossible.

The footing in the main stadiul upheld perfectly despite the heavy rain. The morning action went on indoors as day two for the 46-rider Prix St Georges wrapped up in the covered arena by noon. British Laura Tomlinson won the class on her come back to the show ring after a one year baby break. She rode the huge bay mare Unique (by Carpaccio x Lord).

However, all attention went to Steffen Peters and the 8-year old Rhinelander mare Rosamunde (by Rock Forever x Fidermark), which sponsor Akiko Yamazaki bought from German Jochen Arl in September 2013. The duo was undefeated at small tour level in 2014 and made a 79.8% scoring national Grand Prix debut in January at the CDN Thermal. The bay mare made her international Grand Prix debut in Wellington today, winning the 3* class with 71.300%.

The panel of judges consisted of McMullen, Clarke, Max-Theurer, Matthiesen, and Umbach and they were in unison on the winning ride. In the course of little over a year, Peters has transformed the chunky Rhinelander into a lanky, athletic sport horse that seems to have grown at least 10 centimeters. The trot work was ground covering with good extensions and sweeping half passes. The passage work was regular but still lacks power from behind, which shows in the swaying hindquarters on the centerline and the still difficult transitions to and from piaffe. In the first piaffe she became very narrow at the base struggling to find balance and self carriage, but the mare is able to achieve a good rhythm and has incredible potential. The tempi changes were still quite problematic. The hindquarters swayed in the two's and there were several mistakes in the ones. The zig zag had much ground cover, though, and the pirouettes were tiny but the balance needed to be better in the left one. Rosamunde is brimming with talent despite her youthful mistakes in today's Grand Prix and she is certainly one to watch for the future! 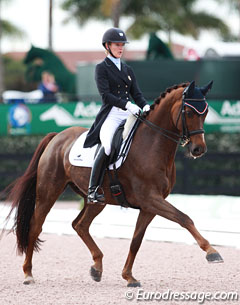 Arlene Page and her rising Grand Prix horse Woodstock, a 12-year old Dutch warmblood gelding by Havel which she discovered in France in December 2012, exceeded all expectations today. The liver chestnut was very rhythmical in the piaffe, even though it lacked spring and some impulsion, but the extended walk was lovely as well as the one tempi changes. The pirouettes were very small. Woodstock got a bit stuck in the left one, but overall Page produced a very clean and smooth ride that earned her a 70.420% and second place.

Nevada based Charlotte Jorst, who trains with Guenter Seidel in California, brought a team of horses to Florida to compete and the trip has paid off. With her 12-year old Dutch warmblood Nintendo (by Negro x Monaco) she garnered quite some show experience in 2014 but in her first show of 2015 she did an admirable job. The chunky bay stallion Nintendo is a familiar face for Europeans as he came from Denmark where he was shown by Thomas Sigtenbjerggaard. In Europe the stallion was ridden in a very tight frame with the nose against the chest, but Jorst clearly opts for a much more open connection and freer presentation of her horse. The rider handled her horse diplomatically and the stallion stood out with brilliant piaffe work in which the regularity was textbook even though the first one traveled too much forward. The trot extensions were all hurried and in the extended walk the horse needs more stretch over the back with the nose out, but the ground cover was ample. The extended canter was very uphill, but the zig zag lacked ground cover. The rider should swing less in the saddle in the one tempi changes, but she rode the pirouettes very well. The final centerline was very strong with smooth transitions to and from piaffe! The duo scored 70.360% to rank third. 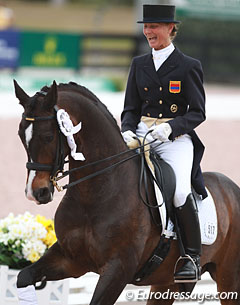 American born Armenian Carrie Schopf also rode on a high note aboard her former Oldenburg licensed stallion - now gelding - Sancisco (by Sandro Hit). All pieces fell into place today and the duo had a lovely sweet ride with much quality in the piaffe and passage work. The ride improved towards the end and the marks climbed. Schopf finished fourth with 69.700% and edged out Lisa Wilcox on Anne Sparks' Hanoverian stallion Pikko del Cerro (by Pik L). This pair showed very good walk work but big mistakes in the one tempi changes and z piaffe that lacked impulsion kept the score from going over 70%. They were fifth with 69.40%.

German Christoph Koschel had his own Westfalian Rostropowitsch (by Rockwell) sharp on the aids, maybe even a bit too sharp. The bay stallion was very energetic and showed much improved passage work in which the lightfootedness and suspension stood out. Unfortunately major mistakes in the rhythm in all trot extensions and swaying tempi changes, as well as an unscripted flying change before the left pirouette, were the biggest issues in his ride. He was lucky to get 68.900%. 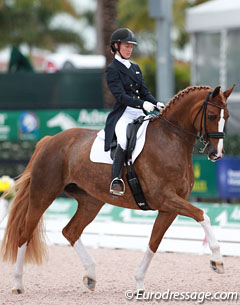 A ride certainly worth mentioning was Alice Tarjan's on the 8-year old Oldenburg mare Elfenfeuer (by Florencio x Sion). The chestnut mare with blaze and stockings is definitely one to watch and can be considered one of America's most promising young Grand Prix horses! She is an eye catcher with her gorgeous trot and brilliantly straight and uphill tempi changes. The pirouettes were tiny. There are still a few problems there, especially the tense walk in which she loses all clarity in the rhythm. Also in the piaffe the mare is avoiding to take the weight on the hind quarters and does not shift the hindlegs underneath the body but actually also breaks in front. Still with more time, power, maturity (and relaxation) this certaintly could be a stunning Grand Prix horse! Today she finished 7th with 67.920%.

British Lara Griffith made her American show debut on the 13-year old Hanoverian Rubin al Asad (by Rubin Royal x Wanderbusch II), ranking 11th with 66.600%. The horse was soft in the contact, produced smooth trot work with a very nice extended walk but the regularity in the passage was shaky at times and in the second piaffe the left hind leg trailed. A mistake in the one tempi was a pity as the changes were uphill and straight. Rubin Al Asad could keep the poll more steadily as highest point.

Swedish Tinne Vilhelmson and her rising Grand Prix star Benetton Dream were eliminated. Upon entering the ring, the horse snorted hard a couple of times and after the first trot extension his nose unfortunately started to bleed.

The action in Wellington continues tomorrow in the main stadium with the Intermediaire I at 8 AM.