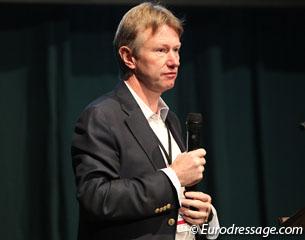 , Channon shares his view on what can improve the sport until a code of points is put in place. Channon first publicly advocated his Code of Points idea here on Eurodressage in 2009.

Michael Klimke asserted that we should drop the highest and lowest judges’ scores.  Stephen Clark made a strong case for retaining both.  Who, if either, is right? I hope Stephen will be delighted to hear that I agree with him.  However, I also agree with Michael. Read on and you will see how I manage to reconcile both viewpoints.

In essence, Stephen’s argument is:

This looks like a reasonable argument to me but I think there are some flaws.

Differing viewing positions - different view positions do have an effect but they do not account for the significant differences we have in scoring.  Look at Herning with one judge 7% lower than the average for Delphi - this was the European Championships and one judge changed the medals.  Unfortunately, this was not a one-off, it happens all the time.  We need a solution that corrects for a judge that is wrong but does not change the majority view of the test.  What I am really saying is that until we have a Code of Points, we need a sensible band-aid.

Psychological effect - I don’t think Stephen would argue against any correction to errant judge scores, as he has already introduced a correction system for judges that are too high or too low (see Article 438 below).  As his system corrects up or down, the implication is that he believes that it is dropping a judge's whole score that would be deleterious to their mental health.

The further, and extremely worrying implication of this statement is that he is saying that judges don’t give marks based on quality of execution.  They have to be “confident enough” to give high scores.  Confident?  I thought if I rode for a 10, I would be given a 10.  Surely, he cannot mean this.

If our system of judging is as good as Stephen believes, then surely judges will mark according to what they see.  If indeed we have to be careful of the mental health of our judges due to the impending threat of having their score deleted, then maybe we should move to a Code of Points where we don’t have to entertain such notions.

The current rule - a disaster waiting to happen...

It is worth examining Stephen’s current rule which was adopted following the debacle at the European Championships:
Article 438 If a judge’s final score for a Horse/Athlete combination varies (above or below) by six (6)% or more from the average of the scores of the other judges for the same combination, the JSP may, by unanimous decision, change that particular score to be the same as the next closest score.

In my view, this is not just a poor solution, but a disaster waiting to happen, for many reasons.  Principally:

The benefits of this approach are:

So there you have it.  I agree with Stephen and Michael - just a small Stickland twist to both their systems and the sport will be the better for it. At least until we have a Code of Points.

by Wayne Channon for Eurodressage