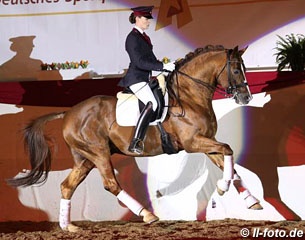 The 13-year old Brandenburger bred licensed stallion Quaterback has been proclaimed Elite Stallion at a special ceremony during the gala evening of the 2016 South German Stallion Licensing in Munich, Germany, on 29 February 2016.

Quaterback is bred and owned by the Brandeburg state stud in Neustadt/Dosse and is by Quaterman out of Passionata (by Brandenburger x Brentano II x Gotland).

Under Christian Flamm he won the 2006 Bundeschampionate for 3-year old riding stallions, but his main focus has always been breeding instead of sport. Malin Rinne competed hm twice in 2010, Susann Gobel took him to Prix St Georges level in 2012 and 2013 and then Anna Weilert picked up some showing in June 2015 from M-level to Inter I. The pair became 2015 Regional Dressage Champion.

Quaterback sired 680 registered sport horses in Germany of which 8 are now competing at S-level. He has 58 licensed sons in Germany and sired 119 state premium mares.