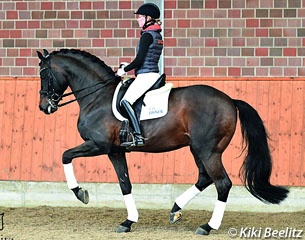 The licensed breeding stallion Damsey (by Dressage Royal x Ritual) has previously trained and competed by Steffen Frahm under the supervision of Jonny Hilberath.

Frahm and Damsey made their international Grand Prix debut at the 2013 CDI Wiesbaden and also showed in Rotterdam and Lingen that year. The pair did not compete at CDI's in 2014 and only did one international in 2015 at the CDIO Rotterdam.

When Frahm left stallion station Meyer, where Damsey is based, to work at Hof Kasselmann he lost the ride on the stallion. Damsey stayed in training at Hilberath's and was briefly on the market, but today Stallion Station Meyer announced that Helen Langehanenberg has obtained the ride on the horse.

"We've been connected privately and on a friendly, sportive level with Helen Langehanenberg for years," said Susanne Meyer. "Therefore we are happy that she has taken over the training of the horse. The next weeks it will show how well these two will connect."