Davignon I Passed Away 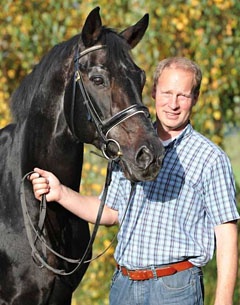 The Hanoverian licensed breeding stallion Davignon I has passed away on 27 July 2016 at age 28.

"It's a sad day for the stallion stations," said Davignon's owner Susan Pape. "In the morning he still went happily into 'his' field and no one had a clue that it would be the last time. It's a nice ending for such a special horse and still we have a hard time saying goodbye to him."

Davignon was born on 16 April 1988 and was by Donnerhall out of Piroschka (by Pik Bube I x Diolen x Wahlmann). He was bred by Horst Rudnick.

Davignon became the foundation stallion of Pape's station in Hemmoor, Germany, as he was discovered by Ingo's father Günter.  He was first approved in Vechta for the Oldenburg verband and licensed the same year for the Westfalian and Hanoverian society. He did his 100-day stallion performance test in Munster in August 1991 and scored 138.92 points in total, ranking 2nd out of 60 participating stallions. He had the top dressage score of 146.49 points.

He competed in sport from 1992 till 1995 under Ingo and Susan Pape. He made his show debut in the riding horse tests in 1992 at Schuffdorf and won the class. Under Ingo Pape he won the 1992 Bundeschampionate in the 4-year old stallion class. His last show was in November 1995 at M-level.

Davignon has sired 30 licensed offspring, including Dacaprio, Davidor, Davignport, Di Caprio, Di Versace and Douceur, and 88 state premium mares. No less than 951 of his offspring are registered as sport horses in Germany and 105 of them have reached S-dressage level. His most famous offspring in sport are Duvalier (Uta Gräf), Dark Diamant (Sophie Baetens-van Lent),

The stallion was retired from breeding in 2013.