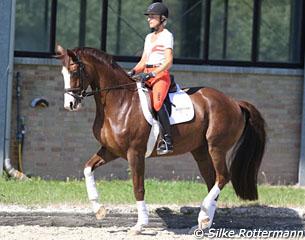 „Life is good“ comes immediately to my mind on that Tuesday morning at the end of August 2016. Standing in the courtyard of a typical Münsterland barn, the sun slowly developing its strength, the sky spotless and blue, I could not think of anything better at that moment than being exactly here. My camera and I waiting for some hours of action under pretty ideal conditions, also from an equestrian point of view, for a mini dressage immersion tour around Warendorf.

From July 2015 until late August 2016 I had been so busy with an equestrian book project that I hardly found time to visit any other equestrian events than those who served getting the suitable photos for illustration. With that finally done and my holidays approaching I decided to accompany a Finnish friend to an "open training day" for English speaking people at Ingrid Klimke's barn in Münster, just for fun and to get the very last missing photo for the book! 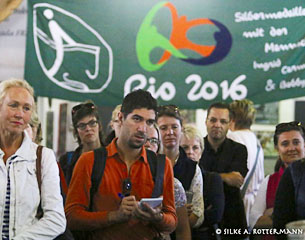 My friends know that horses and sport go hand in hand to me, but that at the same time I am an "equestrian connoisseur“" or like some others describe it less metaphorically with raised eyebrows "a classicist." Yes, I frankly admit that neither my mouth drops open nor my eyeballs pop out when I see the miracle of modern breeding turn a diagonal into a trotting race, with front-legs chasing the clouds in the sky. I am first and foremost interested in the quality of training and riding.

So for somebody with my attitude and my heart beating as passionately for eventing as for dressage, this is a nice opportunity to nurture my hunger for good equitation.
Ingrid's bunch of horses in both disciplines (plus the pure jumper Parmenides) is not only interesting to inspect for their different training level (from recently broken in to Olympic medalists), but also for the partly totally different types. 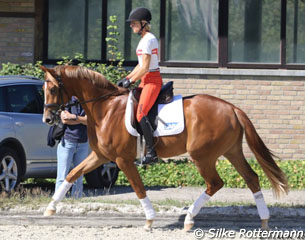 There's the strikingly coloured 3,5-year-old Westfalian stallion Firlefranz, a son of Ingrid's small tour winner Franziskus (out of a dam by Rapallo) who is already very well sorting out his endless legs for a horse his age. Around 50 English speaking onlookers stand very close to the fence and the „blondie“ is taking a very good look at us all. Ingrid encourages him to be "courageous" and that he becomes. A little later his father Franziskus (by Fidertanz x Alabaster) appears on the scene. He is stabled at his owner Wilhelm Holkenbrink's yard in Münster and is trailered to Ingrid's barn for training. This very successful breeding sire with the huge neck and an aura of dominance, which immediately catches the onlooker, first has to share the outdoor arena with Geraldine (by Fürst Grandios x Tolstoi). The Rhinelander mare and the Hanoverian stallion have turned out to be Ingrid's highly successful dressage horses at small tour level this season, both winning qualifiers for the Nürnberger Burgpokal finals this December. 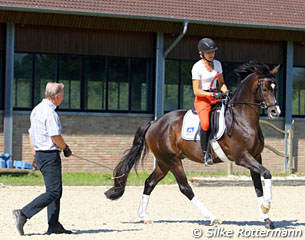 What leaves an impression is that Franziskus, so very much male, still does not scream at the mare cantering alongside him, nor does he even bat an eyelid. He seems not only physically matured. Both horses are also worked in "double-lunge", which is what Wilfried Gehrmann call it. He is the head of the federal Riding School of Rhineland for the past 25 years and a renowned expert for that kind of work. Geraldine seems to be taken up in it. Like a busy bee she offers very promising piaffe steps, ears pricked, tail relaxed. For me this is the true spectacle of this sport which sets my heart aflutter: If a horse does the most collected movement the Olympic programme requires and seems to feel comfortable with it. 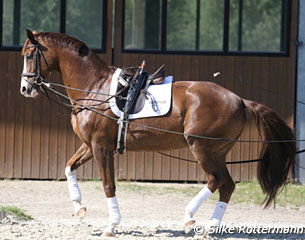 Jumping, cavaletti- and canter work also for the arena acrobats and higher dressage for the eventers: Ingrid Klimke's training approach is no secret to the wider public, but it is real fun to see the tiny Trakehner stallion Königsee (by Interconti x Tambour) extends his trot exemplarily and collect his canter as if he were starting a canter pirouette. A few days later he becomes the Bundeschampion of the six-year-old eventing horses in Warendorf. Maybe Ingrid's secret is also to be found in what she explains to the interested public on that day: That a rider better doesn't determine the discipline 100%, but leaves some self-initiative to the horses, "because otherwise the rider had to be always right and naturally that's not the case."

A place which I never skip to visit when „up there“ in Germany is Warendorf.
So after I left Klimke's barn I directly head there. It is a day prior to the first day of Germany's "Who's the next four-legged super-star?" in the three Olympic equestrian disciplines. I stroll through the old town of Warendorf where some shop owners have affectionately decorated their window displays for the Bundeschampionate. My way downtown leads me over the „Walk of Fame“, dark plates embedded in the tarmac which remind the attentive onlookers of the Olympic successes German riders had. Rio is naturally still missing though. 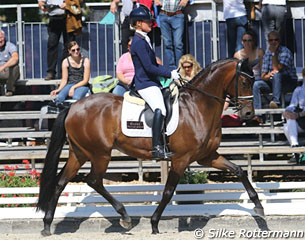 In the late afternoon, after having visited a friend at the federation's publishing house, I walk over the few metres to the DOKR stables. Behind the tradestands are tents already errected and decorated for the action kicking off the next day. The warm-up arena directly at the edge of the forest is used by several riders to train their horses and ponies. Unfortunately I am not very lucky and my hunger for good equitation cannot be appeased with what is presented to me. The sad fact is that it is not even really rough or strikingly ugly riding. I'm sure that many would not feel the need to moan loudly because of it, unlike when you see catchy rollkur riding.However  the riding presented to me in these 20 minutes is simply not correct: horses' heads constantly behind the vertical and riders taking care that it remains there. I would really be interested to hear why it is necessary with any horse, over all with the best German breeding has to offer, to ride them like that. Slightly frustrated I retreat to my nice hotel and treat myself to a superb diner with a really nice white wine which both lift my spirits cagain, before spending the rest of the evening downloading my morning photos. 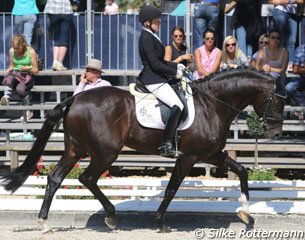 The next morning I stroll relaxedly to the showgrounds, with the qualification round for the 6-year-olds on the morning programme. The parking is already filling considerably and the nice welcoming lady from the FN confirms my impression that the good weather seems to attract many more people than it usually does on the first day of the Bundechampionate. The warm-up-place presents a different picture from the evening before. And to my utter delight there are several nice rides coming up in the qualification for the 6-year-olds which takes place in ideal conditions and under the eagle eyes of numerous experts on the tribunes or along the fence. If one is not only entirely interested in the horse's quality, the stretching in trot and the „überstreichen“ (give and retake of the reins) in canter for 2-3 length of a horse to check the self-carriage is the most interesting movement to watch. It is not part of the higher international dressage classes that many of the horses will compete in later. While the upper level movements are mastered rather well by many horses, the simple basic "uberstreichen" turns out to be a real challenge for some horses.

Unfortunately I have to leave in the early afternoon and tackle the drive 450 km home. A short, but active equestrian „holiday“ draws to a close. And like almost every time with pesky traffic jams along the route, I ponder in my car and consider questionif the journey was worth the wait on the German Autobahn. „Yes“ has been the answer in almost every single case I drove to Warendorf and now it is not different!