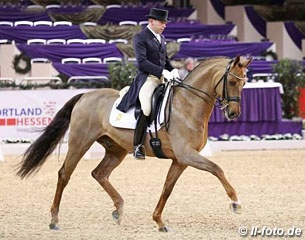 German Grand Prix rider Falk Rosenbauer has lost his position as head trainer at Rebecca Gutman's Gestut Bonhomme in Werder, Germany. Disagreements between the stable management and the rider led to the ending of the collaboration.

The 43-year old Rosenbauer has been working at Bonhomme since September 2014, replacing Holga Finken as head trainer.

On 1 May 2015 Rosenbauer injured himself in a severe riding accident at the CDN Redefin, but his fractured thoracic vertebra healed well.

Falk was initially trained by Siegfried Stemmann, but in the 1990s he got his most important education from Herbert Rehbein, working at Gestut Gronwohldhof for 10 years. He worked for Gestut Sprehe and trained Desperados to Grand Prix level. As of 2010 he was based at Markus Waterhues's yard before accepting the position of head trainer at Gestut Bonhomme. After little over two years on the job, Rosenbauer and Gutmann have decided to go separate ways.

Rosenbauer has returned home to Flensburg and the riding of Rosenbauer's Bonhomme horses has temporarily been given to the other Bonhomme riders. Kira Wulferding will assist them at the upcoming stallion shows.