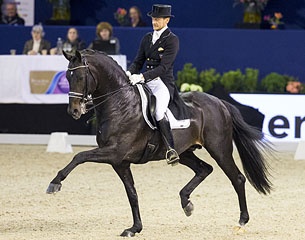 Edward Gal, former World Champion and world record holder with Totilas, has disclosed that he will be making his higly anticipated Grand Prix debut on Zonik during the 2017 outdoor show season.

In an interview with the Dutch equestrian magazine De Paardenkrant, Gal revealed that Zonik's Grand Prix debut is in the making.

"At home everything keeps going better, but it is of course a stallion so we'll have to see how that goes with the breeding," Gal told Paardenkrant, not confirming an exact date. "It's always a bit exciting, but it looks good and as soon as he has done his first Grand Prix we'll know more."

Zonik is a 9-year old Danish warmblood licensed stallion by Zack out of Romanik (by Romanov). he is bred by Linette Jaeger and was discovered as a youngster by Andreas Helgstrand. The stallion was a premium licensed colt at the 2011 Danish warmblood licensing and he finished third in the 35-day stallion performance test. Andreas and Zonik won the 2012 Danish young horse championships for 4-year olds in Odense. 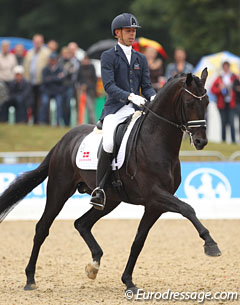 In the late autumn of 2012 Austrian Gaston Glock acquired the stallion from Helgstrand and Hans Peter Minderhoud competed him at the 2013 World Young Horse Championships in Verden, Germany, where the pair finished 8th in the consolation finals.

Gal took over the ride on the stallion and made his national small tour show debut at the CDI-W 's Hertogenbosch in March 2015, scoring a whopping 78.289%. Gal and Zonik returned in public at the Oldenburg Althengst Parade in November 2015, where he already displayed most of the Grand Prix movements. In 2016 the pair competed more extensively at national Prix St Georges level. They won the national small tour classes at the 2016 CDI-W Amsterdam in January, with 81.096% and 83.775! The pair won the 2016 Dutch Small Tour Championships with similar high scores.