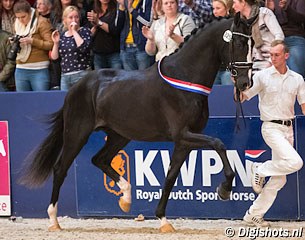 Jameson RS2 became the champion of the 2017 KWPN Stallion Licensing which concluded on Saturday afternoon 4 February 2017 at the Brabanthallen in 's Hertogenbosch, The Netherlands.

The second dressage day at the 2017 KWPN Stallion Licensing led to the committee accepting a further group of stallions for the upcoming stallion performance testings, a mandatory phase for stallions to achieve full KWPN licensing. The total amount of colts was brought to 38 accepted after two days of licensing.

Seven stallions were invited to the premium ring to battle it out for the champion's title. The black Jameson (by Zack out of keur mare Atilinda M (by Negro x Krack C) was proclaimed the champion of the year. He is bred by Willeke Bos and was acquired in utero by Saskia Lemmens and her husband Jacques of RS2 Dressage centre at the Prinsjesdag Foal Auction almost three years ago.

"Jameson RS2 has a fantastic canter, a great capacity to extend and collect and lots of self-carriage and balance in movement,” said Bert Rutten, the chair of the stallion selection committee. 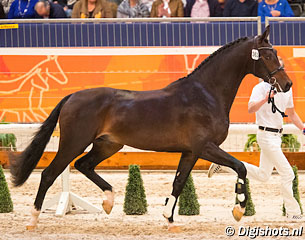 At the KWPN Select Sale, the auction following the licensing, the top priced stallion was the licensed but non-premium stallion Jerez (by Vivaldi x Ferro) which sold for 160,000 euro to Dutch duo Eric Koele and Eugene Reesink.  Andreas Helgstrand acquired Jetlag (by Fellini x Florencio) for 150,000 euro.  Helgstrand also acquired Jack Sparrow (by Expression x Vivaldi) behind the scenes. The stallion was not accepted by the KWPN society, but members of the Oldenburg society accepted him straight away for Oldenburg breeding in Den Bosch. Helgstrand is also taking home Jambeau (by Apache x Hitchcock) after a private sale. 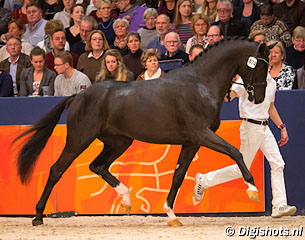 The approved stallions are: