Prince Richard of Sayn-Wittgenstein-Berleburg Passed Away 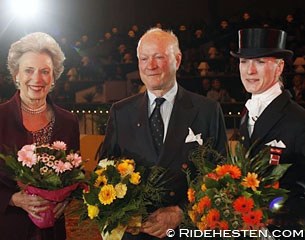 Prince Richard of Sayn-Wittgenstein-Berleburg, the father of Danish Olympian Nathalie zu Sayn-Wittgenstein and husband to Princess Benedikte of Denmark, has died unexpectedly at age 82 on 13 March 2017.

The Danish Royal Court announced the sad news this afternoon. Their statement read that, "His Highness died suddenly at the castle Berleburg yesterday evening, Monday 13 March. Her Royal Highness Princess Benedikte has travelled back home to Berleburg Tuesday morning after a short stay in Denmark."

Princess Benedikte (72) was in Denmark on official duty, for the opening of the Copenhagen International School and a meeting with the Girl Scout’s Confederation in Copenhagen. She also attended the 2017 Danish Warmblood Stallion Licensing in Herning on the weekend.

Prince Richard lived at the family castle, Schloss Berleburg, in Germany. Together with Benedikte he had three children, Gustav, Alexandra and Nathalie.