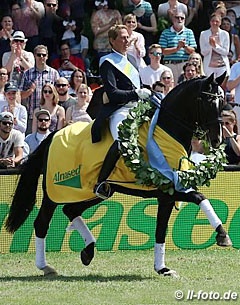 Former British Grand Prix team rider and Olympian Emile Faurie became the first Brit ever to win the Hamburg Dressage Derby at the Klein Flottbek derby park in Hamburg, Germany on Sunday 28 May 2017. In grand, superior style Faurie won the finals with horse change with no less than a 10 percentage point advantage.

The top three of the CDI Grand Prix qualified for the Finals with Horse Change, in which each rider has to do the Short Grand Prix on each other's horse. Faurie rode Elena Knyaginicheva's 13-year old Hanoverian bred Lollipop (by Lord Sinclair x Welt Hit I) to a second place in the Grand Prix, his 2017 European Champion team hopeful. However, opted for Hof Kasselmann's 11-year old Westfalian mare Escada (by Ehrenpreis x Donnerschlag) as his mount for the horse change finals. His contestants were Grand Prix class winner, Russian Tatiana Kosterina on Diavolessa vA (by Don Frederico x Londonderry), which is owned by the breeder, the high scool principal Josef Scheele-von Alven; and Bianca Kasselmann on Elena Knyaginicheva's 13-year old Hanoverian stallion Delatio (by De Niro x Rubinstein). 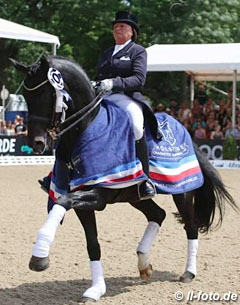 The 53-year old Faurie was ecstatic to have won the Derby but he admitted "honestly, never again. This was so nerve-wracking."

Rules for derby qualification have changed year after year with different formats constantly being installed on how to determine which three riders get to compete in the Finals with Horse change. This year only the Grand Prix counted for the Derby. The top three ranked riders of the Grand Prix qualified for the Horse Change Finals.

The Hamburg Dressage Derby was first held in 1955. Reinier Klimke is the record holder to have won it 15 times. Between 1965 and 1995 the derby split into a male and female division. British Johanna Sybille Hall became the first "foreign" rider to win the Derby in 1965 in the first year of the split division. As of 1996 the derby became unisex. In 1974 and 1975 the derby was decided for the first time without horse change and this format was repeated in 1993 through 1998. The Hamburg Derby also swapped CDN and CDI status on multiple occasions. The first "foreign" winner of the Derby in the mixed gender system was Danish Lars Petersen in 2014, when the Finals were entirely non-German. In 2016 Spanish Borja Carrascosa won and now in 2017 Emile Faurie put the Derby title on his name.