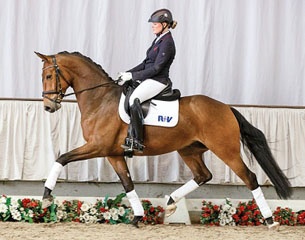 The 4-year old gelding Stravinski became the price highlight of the 2017 Westfalian Summer Auction held in Munster-Handorf, Germany, on 11 June 2017.

Stravinski (by Sir Fidergold x Laurentianer) is bred by Bernhard Deitert and was owned by TSP Thole Sport Horses, who had bought the colt as a foal at the Westfalian Elite Foal auction in 2013. Stravinsky sold for 57,000 euro to the U.S.A.

The 4-year old Fraulein Tausendschön (by First Final) sold to a client in Bavaria for 36,000 euro. She also purchased Fresh Morning (by Furstenball x Beluga) for 20,000 euro.

Mattea (by Millennium x Lugato), bred by August Frerick, was the third most expensive horse at this auction and sold for 35,000 euro to Great Britain. Quintessa (by Quasar de Charrt x Potsdam) and Fritzi (by Franziskus x Warkando) both sold for 30,000 euro.

The average price for a sport horse at this auction was 16,682 euro. Thirty-three horses in total sold and five were bought back by the owner.