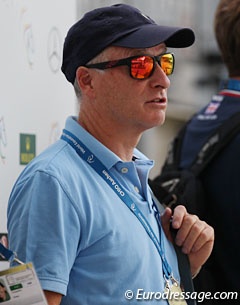 The Dressage Judging Working Group has made its official recommendations for rule amendments in 2018. The FEI Dressage Committee has already reviewed the DJWG's proposal and provided their own comments to it.

The DJWG has chosen to propose the listed measures for 2018, as short term measures until they come to an agreed revised judging system.

Each Judges' hut must be equipped with a button linked to the Judges Signaling System, allowing each judge to discreetly inform the C-Judge in case of blood, lameness, error of course or saddlery/equipment.

Adopt HiLoDrop scoring per movement for all FEI dressage competitions, with the exception of Young Horse events and for all juries with 3 judges.

In HiLoDrop the highest and lowest scores awarded by the judges for each movement in the test are not taken into account and the average score for that figure is formed from the remaining scores. The final score awarded to the rider and horse is formed by the coefficient weighted sum of this score for all the movements. Each judge’s score sheet is unaffected by this process and the final scores per judges form part of the record of the event. Such a system is widely used in other Olympic judged disciplines and also in other equestrian judged sports.

Following a detailed analysis of almost 1000 competitions from 2017 it is shown that the average effect on final scores is a shift of +0.1% with a spread (standard deviation) of 0.2%. In fact only 3% of all GP/GPS results would change by more than 0.5% - in almost every case a small upwards change. The correlation of the HiLoDrop score and the score from the current system is perfectly linear. While the changes are almost invisible for the vast majority of cases in a few cases an important correction would be made; HiLoDrop ensures that the consensus view of the jury predominates in the final result and is not unduly influenced by one judge being exceptionally high or low for whatever reason. The DJWG recognizes that in some circumstances that judge may have been more correct were a detailed re-examination of each movement carried out, but believes that the consensus result is the one that should go forward to the eventual ranking. All movement scores from all judges will go forward to the official record and be communicated to the rider in the normal way.

Dressage Technical Committee comments on HiLo Drop: There are different feelings and opinions within the DC. Three are in favor, one against (placings are more important than marks) and two are undecided. The following concerns were raised:
- A judge may mark lower than the others, but will not necessary be wrong in his/her judgement.
It is acknowledged that with such system, the Riders will in any case receive their score sheets with all the marks and comments given by all Judges, to include the mark per movement which was dropped.

Collective marks should be partially removed from all FEI tests in 2018, keeping only the collective mark for the Rider. This will not be applicable for the Young Horse Tests.

Dressage Technical Committee comments: In principle the DC agrees to this suggested change. The DC however would like to insist that relevant comments are made for each movement so that the submission of the Horse is marked. The DC agrees that the mark for the Rider should be maintained as suggested.

The JSP no longer corrects scores in championship events, but that this is replaced with the introduction of HiLo drop by movement and 6% Rule would no longer apply with the HiloDrop scoring (for CDI with 5 and above Judges).

The JSP has two main functions, the supervision of the judging corps and more recently the correction of specific judging mistakes at championship events. This second role will become largely redundant with the introduction of HiLoDrop scoring as most movement “judging mistakes” will automatically be corrected. (For example an unseen change-error by one judge will automatically be removed from the final score). In addition, with a system of not correcting marks, the awarded score will remain part of the public record.

Dressage Technical Committee comments: Should the HiLo drop system be adopted, the DC agrees to the review of the tasks and composition of the JSP.

View the official document with the DJWG proposals