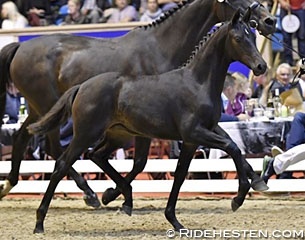 The third most expensive foal was the dressage filly For Ronett (by For Romance x Romanov), which sold for 28,000 euro, while filly Finesse Langholt (by Finest x Don Schufro) switched owners for 27,000 euro.

Fifty foals were actually sold at this auction (76% of the collection).