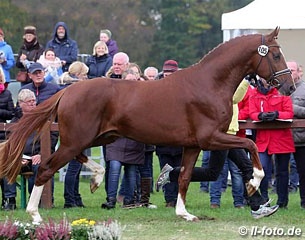 Christmas came early at the 2017 Hanoverian Stallion Licensing in Verden, Germany, on 26 - 28 October 2017, where no less than 53 stallions out of a collection of 72 dressage colts were approved for breeding. Thirteen stallions were decorated with the premium title.

The best represented and most successful DNA at the 2017 Hanoverian licensing was not from Hanoverian blood, but Rhinelander: the Florestan lineage (which goes back to the Anglo Normand Furioso II and its thoroughbred predecessors) dominated the licensing with 14 approved get. Finest, Farrell, Franziskus, For Romance, and Furstenball contributed to this feat.

As the Hanoverian licensing committee no longer proclaims a licensing champion, the marketing moguls decide which stallions stood out and who was the best of the lot by paying the most money at the auction (if the stallion is offered for sale).

Out of the lot of 13 premium stallions, the most expensive one was Wilhelm Klausing's Rhinelander registered, chunky So Unique (by Sezuan x Donnerhall). The very athletic colt, who has the musculature of a 14-year old Grand Prix horse, was very much liked by the crowd. He stood out with a very powerful canter and his trot was highly cadenced. He sold for 650,000 euro to Andreas Helgstrand. 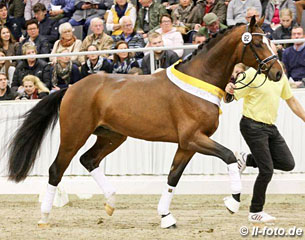 The second most expensive colt was also acquired by Andreas Helgstrand, but in partnership with the Luxembourg syndicate Grand Ducal Dressage. For Sure (by Finest x De Niro), bred by Günter Lindwehr and owned by Berhard Ruwe fetched a price of 360,000 euro.

The thirteen premium stallions were:

Eurodressage will be publishing an in depth report from the licensing later this week.