For Ferrero Winner of the 2017 KWPN Autumn Stallion Performance Test 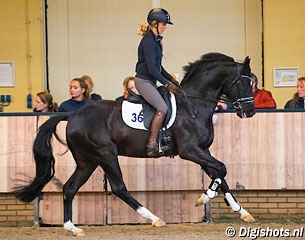 For Ferrero (by For Romance x Don Crusador) became the winner of the 2017 KWPN Autumn Stallion Performance Test which concluded in Ermelo, The Netherlands, on 25 November 2017.

Out of the 14 stallions that began the 50-day autumn testing only seven concluded the testing with a sufficient score and are now accepted to breed for the KWPN society.

For Ferrero, who began the testing as Ferrero VDB, is bred in Belgium by Els Cooremans and is owned by Stal van de Sande and Gunther Nelis. Bred on entirely German lines, the For Romance x Don Crusador x Wolkenstein II scored 85 points. He got a 9 for walk, 8 for trot, and 8.5 for canter, suppleness, self carraige, rideability and dressage potential.

The second highest scoring stallion was Joyride (by Ampere x Jazz), bred by De Engelse Hoeve and owned by the Spanish duo Petit and Gallardo. He scored 84 points with an 8 for trot and an 8.5 for walk, canter, suppleness, self carriage, rideability and dressage potential.

Six of the seven successfully tested stallions have been renamed, supposedly to avoid name-conflict, but in fact disrespecting the choice of the breeder.

The approved stallions after the 2017 autumn testing are: