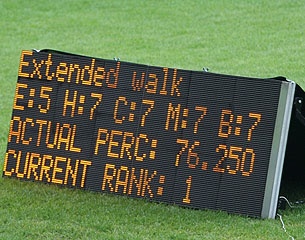 The 2017 FEI General Assembly in Montevideo, Uruguay, has voted in favour to the Dressage Judging Working Group's proposal to remove three of the four collective marks on dressage score sheets as of 2018.

In their official proposal report published in August 2017, the DJWG stated that:

With the possible exception of the Rider/Aids mark, the DJWG feels that the collective marks are already taken into account in the movement scores. The switch of emphasis from a movement mark - based on exactly what the judge sees at the moment of execution - to a collective note that is designed to summarize the entire test, does not aid the judge’s focus.

Statistical analyses of the collective marks in tests from 2017 and in particular from the 2017 World Cup Finals in Omaha have proven that the top scoring, big names riders get an extra score boost from the judges in their collective marks.

By removing three of four collectives, judges will get less opportunity to influence the overall score at the end of the score sheet.

The General Assembly approved modifications to the Dressage Rules including the introduction of a Medium Tour Freestyle test and the removal of the collectives.

The General Assembly voted separately on the proposed change to collective marks – the removal of marks for Paces, Impulsion and Submission and replaced with one single criteria for the Athlete's position and seat; correctness and effect of the aids. This was approved, with five National Federations voting against and two abstentions.

Germans Disgruntled about the Decision

When the news became public that the collectives were removed, the typical reaction of outrage and disbelief arose, even though very little lobbying and campaigning, let alone public discussion, had been done carried out against the proposal. The dressage world seemed so busy fighting off the HiLo drop that they forgot to care about the collectives.

Especially in Germany a fierce disagreement with this decision was published with headlines that "international dressage sport is moving in the wrong way."

"The scratching of the collectives is my opinion a very bad idea," said Theodorescu. "I had already expressed my opinion beforehand to the IDTC that I didn't like it. The collectives are essential to highlight the value of the principles of dressage. The judge gets the opportunity to weigh the rider's focus positively or negatively. Whether is the clarity of gaits, the throughness, the connection, the activity from behind and much more. I hope that because of this change we won't return to seeing horses who are not loose, nor relaxed and lack natural expression." 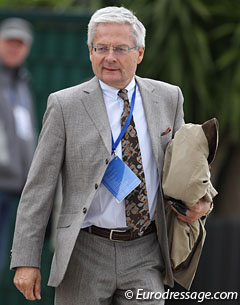 Judge Plewa said he was surprised that the GA voted to remove the collectives and rather had preferred to have seen the coefficient to the aids and seat collective removed. Plewa admits that judges have used this collectives as an opportunity to influence the overall score. "Not infrequently a rider benefits from his name on this note," said Plewa. "I find the rider/seat score important, but in comparison with the other collectives, this score is of little significance.

Plewa regrets the removal of the collective for paces. "Especially the score for clarity of gaits is particularly valuable. For instance, when a horse shows mistakes in the rhythm in the test, which are not enough to eliminate the horse, then we could have expressed our remarks on balance and clarity in that collective mark."

Collectives Echo What Needs to Be Judged in Figure Scores

The collective for rider's seat and aids has always been a puzzling mark with big name riders who sit deadstill in the saddle but their horses have tongues half sticking out, jaws crossed, and nosebands cranked getting consistent nines for seat and aids.

David Stickland told Eurodressage that, "personally I had proposed scrapping them all as they also firstly introduce a place for the judges to get back into line again. I also showed that they (disproportionally?) favour the top riders."