Chupa Chup AS Sold to Japan 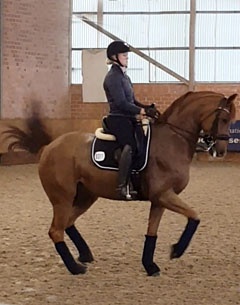 Chupa Chup is bred by Orlanda Dragman in The Netherlands and is by Sorento x Fidermark. He was owned by Danish Patricia Florin.

The gelding made his show debut in Sweden under Moa Grodinger, but was also competed by Mads Hendeliowitz, and at small and big tour level by Danish Jacob Noerby Soerensen.

In 2017 the chestnut moved up to Grand Prix level and Jacob Noerby Sorensen showed him at GP level in one CDI in Uggerhalne, where he finished 14th in the Grand Prix with 66.840%. Afterwards the horse moved to Germany to Patrik Kittel's stable to be sold. Swedish Grand Prix rider Malin Nilsson took on the ride and they made their debut at the national show in Ankum in October, where they won the Grand Prix.

The talented gelding has now been sold as Yuko Kitai's Olympic hopeful. The horse will stay in Germany for further training by Kittel and Nilsson. The 44-year old Kitai is not an unfamiliar face to Patrik. He has coached her on Rambo (by Nactus x Ganesco) to the 2008 Olympic Games in Hong Kong, where Kitai finished 44th in the Grand Prix.