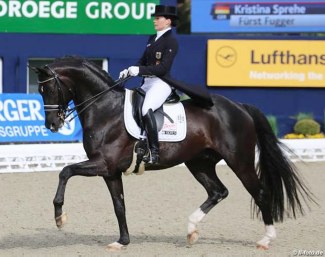 He was licensed at the 2008 Westfalian Stallion Licensing in Munster-Handorf and later approved for the Oldenburg society and south German studbooks. Furst Fugger did his 30-day Stallion Performance Test in Schlieckau in 2009 and scored 8.94 for dressage and 7.79 for show jumping (total 8.31).

Furst Fugger then disappeared from the scene once more, only to briefly return in 2015 to compete at two shows, the Nurnberger Burgpokal qualifiers in Hagen and Munich, where he finished third and second. The CDN Munich in May 2015 was the stallion's last show.

Marco Bernal has now purchased the black stallion as his hope for the future.

The 55-year old Wellington based Colombian competed at the 2010 and 2014 Central American Games, the 2010 World Equestrian Games and the 2011 and 2015 Pan American Games. His top small tour horse has been Farewell IV, a now 17-year old Westfalian stallion by Fidermark x Rosenkavalier. Bernal's last CDI competition were the 2015 Pan Am Games in Toronto two and a half years ago.