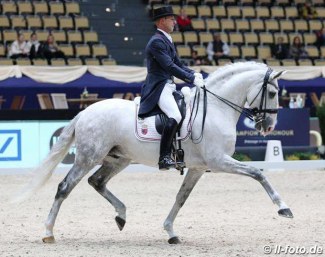 St. Georg reported that the licensing of Dragao das Figueiras for the Oldenburg verband was announced at the stallion show in Vechta on Sunday 18 February 2018. His breeding book for Oldenburg registry has been limited, though, to 20 mares per year.

Wolfgang Schulze-Schleppinghoff, the GOV breeding director, motivated the stallion licensing committee's decision for this extraordinary decision: "Character, strength in his back and possibility to collect."

The Oldenburg society has approved a select number of PRE's before, but this is the first Lusitano stallion. Dragao is by Unico out of Valeria (by Xaquiro)

The 10-year old Dragao is bred at Herdade de Figueiras and was initially owned by Antonio Simoes. The stallion was trained and competed from novice level to international small tour by Spanish rider Jose Antonio Garcia Mena. Dragao returned to Portugal at the end of September 2015 after Mena failed to get a contract to secure the future ride on the stallion. Dragao was then briefly allocated to Morgan Barbançon, but moved back fairly quickly. The grey later popped up at Andreas Helgstrand's sales barn and was briefly shown by Spaniard Severo Jurado Lopez, before selling to Grand Ducal Dressage in Luxembourg as Sascha Schulz' new Grand Prix horse. Between May and December 2017, Schulz and Dragao competed at CDI's in Mannheim, Achleiten, Pompadour, Cappeln, Le Mans, Munich, Madrid and Geneva.

So far, Dragao has a very limited breeding record with 26 offspring registered in Portugal. His oldest offspring is now 3 years old.