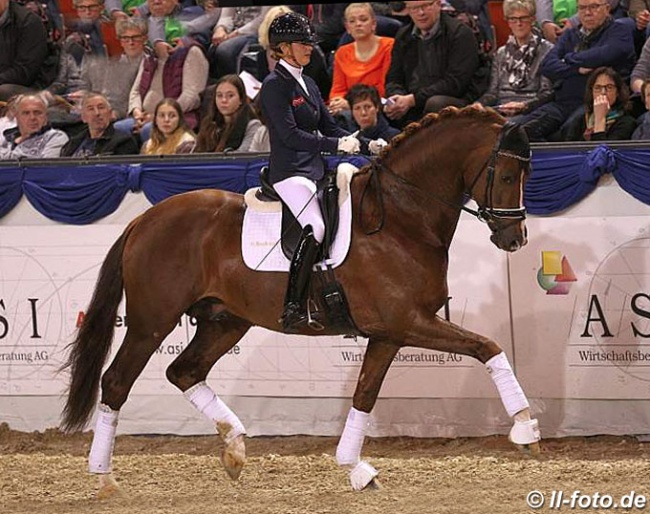 The 5-year old Dutch warmblood bred and Oldenburg licensed stallion Ibiza has returned to Germany and is currently being trained and ridden by Juliane Brunkhorst.

Ibiza is bred by Luc Boogert and is by Desperado x Jazz x Contango.

He sold as a foal for 72,000 euro at the 2013 Midden-Nederland Foal Auction to Jan Vink. He was licensed at the 2015 Oldenburg Stallion licensing in Vechta, presented by horse dealer Ad Valk, and sold at auction for 170,000 euro. The horse apparently sold back to Ad Valk, who then sold Ibiza privately to German Vasco Janke.

Ibiza did his 14-day Stallion Suitability Test in Adelheidsdorf in the spring of 2016 and scored a total of 8.0. At the 2017 German Stallion Sport Test in Munster, Ibiza got 8.7 for trot, 9 for canter, 8.8 for walk, 8.5 for rideability and 8.8 for general impression (total 8.73 points). He has also been approved for Hanoverian breeding, but is not licensed with the KWPN society.

In 2016 Ibiza was one the most popular and used breeding stallions in Europe alongside Revolution.

Scholtens trained Ibiza through the winter, but due to a conflicting show schedule in March, the stallion moved back to Germany.

"Because I'm riding Indoor Brabant with Apache, I couldn't ride Ibiza in the Sport Test (in Munster 7 - 9 March 2018)," Scholtens told Eurodressage. "That is why the owner sought a different rider. I'm not sure if he's coming back."

Janke has sent Ibiza to Juliane Brunkhorst, who is based with Hartwig Burfeind in Germany.

"Ibiza arrived one and a half week ago in my barn," Brunkhorst told Eurodressage. "After such a short time this fantastic horse has done a super test today in Münster. He has three extraordinary gaits, a lot of potential and a top character. My first impression is just amazing and we will see what the future brings."