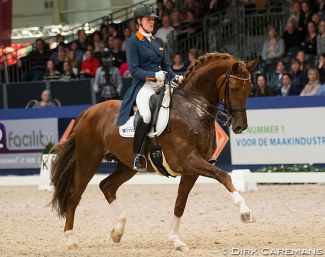 The chestnut Charmeur is bred by the late Huub van Helvoirt and is by Florencio out of Trendy (by Jazz). He was owned by Nico Witte in partnership with Barend Tamerus.

Charmeur is one of KWPN' most popular breeding stallions with already 1200 registered offspring. He was the 2010 KWPN performance test winner and has produced four licensed sons so far.

As a youngster he was successful under Emmelie Scholtens. He won the 2011 and 2012 Pavo Cup Finals and finished 5th at the 2012 World Young Horse Championships. At the 2013 World Championships he had to be retired in the preliminary round.

Madeleine Witte-Vrees took the stallion to FEI level and did one international with him so far, the 2015 CDI Mallorca, where they were third in the Intermediaire I.

Witte-Vrees has been working long and hard to bring the stallion to Grand Prix level. After a few local Intermediaire II tests in Holland, the stallion finally made his Grand Prix debut last weekend (12-13 May 2018) at the 2018 CDN Liempde. He won the class with 72.39%.

"Barend was willing to sell his part to us," Witte explained. "We have all confidence in Charmeur and expected him to be a real player in the future. We are happy to be able to keep him for Dutch sport and for the time being the ride will stay with Madeleine."

Madeleine Witte-Vrees is a Dutch A-squad rider with the licensed stallion Cennin (by Vivaldi x Donnerhall). She also has Grand Prix stallion Wynton (by Jazz x Matador) to ride.