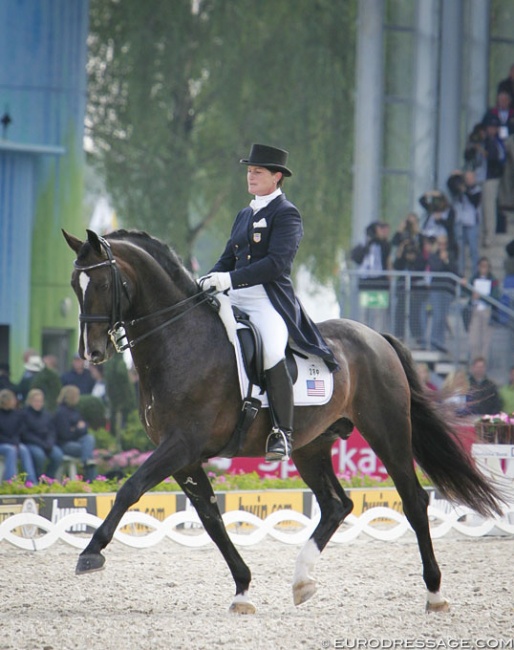 Tip Top was euthanized on 31 May 2018 due to testicular cancer. The dark bay stallion was diagnosed with the disease a year ago.

The 1994 born Swedish warmblood stallion was by Master out of Hortensia (by Chagall x Figaro x Sombrero). He was bred by Poul Erik Lang in Sweden.

As a youngster he competed in Sweden under legendary trainer Kyra Kyrklund and was the first horse ever to win the Swedish Young Horse Championships (Breeder's Trophy) three years in a row. As an 8-year old the stallion sold to American Leslie Morse who trained him to Grand Prix level.

Tip Top and Morse made their small tour debut in 2003, won the 2004 U.S. Small Tour Championships. In 2004 he moved to Grand Prix level and his career at top level extended until 2010.

In 2007 they competed at the World Cup Finals in Las Vegas (12th place). In 2009 they became U.S. Grand Prix Champions.  Colic surgery in March 2010 briefly interrupted Tip Top's career but he returned to compete at the 2010 U.S. Dressage Championships and trials for the 2010 World Equestrian Games.