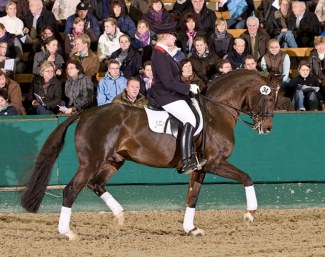 The Westfalian state stud owned stallion Fiano has been sent to Crawinkel, Germany, where he will become part of the wild life and nature protection project "Thuringeti".

He was a premium stallion at the 2001 Westfalian Stallion licensing. He did his stallion performance tests in 2002 and scored 8.04 points in the 30-day testing and 146.03 index points in the 70-day test. He competed at the 2004 Bundeschampionate for 5-year olds and was shown just up to M-level. His last competition was in 2011 under Rebekka Rösler.

As the Warendorf state stud is undergoing major restructuring and the new managing director is selling or relocating all breeding stallions that have no commercial value to the stud anymore, Fiano has now literally gone back to nature. He will be turned out in a herd of 600 horses that have a field of 2.500 hectares to roam on. They share the field with 350 cows. Fiano will join another breeding stallion, Forrest Gump (by Florestan x Donnerhall x Pik Bube), in that massive herd.