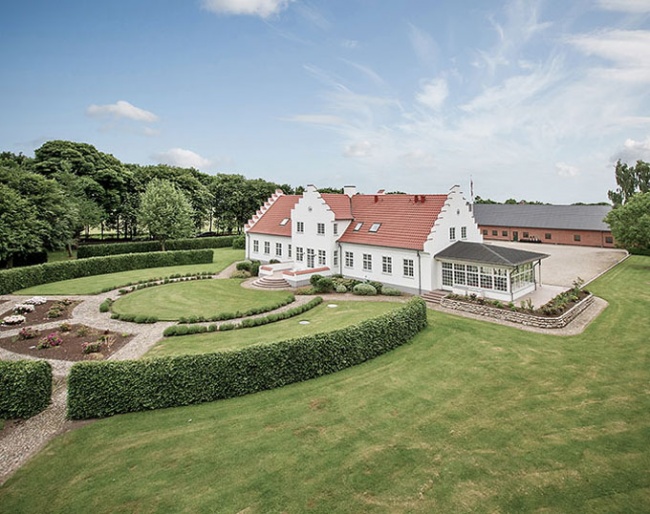 Andreas Helgstrand has bought the farm "Ny Ravnstrup" five minutes from his own base in Vodskov, Denmark, as a new yard where he wants to rear his foals and young stock. Helgstrand purchases between 50 to 70 foals a year and wanted to have them located as close to his yard as possible. Rider Thomas Sigtenbjerggard will be the general manager of the young stock farm. He will be joined by his wife, Lene Birkemose, who is managing the stallion station, and they are going to live at Ny Ravnstrup. They are going to build an extra barn there to house a total of 150 horses as well as build an indoor arena.

Klaus Ostendorf, founder of Gestut Famos in Syke, Germany, passed away on 31 October 2018 after a long period of illness. Ostendorf was 72 years old. He garnered his fortune as an entrepreneur in the Wendeln bakery, but his professional career ended in tragedy with a hygiene scandal and him convicted of fraud and bankrupt. He leaves behind wife Kathrin and three children from a first marriage.

Less than two months after 2017 and 2018 European Children Champion's horse Happy Feet got allocated a new rider, Jill Bogers, the owners Van Woudenberg decided to hand the ride to someone else, the 12-year old Anne Uijtewaal. Bogers had expressed interest to take Happy Feet into the junior division, but the owners of the 11-year old Happy Feet (by Tuschinski x Animo) prefer the horse to thrive in the children's division.

American Grand Prix rider Elizabeth Armstrong Powers has lost her 22-year old retired Grand Prix horse Parsifal. Bred by Agner Jensen, Parsifal was by Limelight x May Sherif. Powers imported Parsifal from Denmark and began competing him at small tour level in 2006. In 2009 they moved up to Grand Prix level. At age 14 the horse's show career came to a stop when a bone cyst in his stifle was discovered. After an 18 month rehab, he came back to the Grand Prix ring until he was 20 years old. Powers will continue her show career with Cardeur and Donamira (by Don Primero).

A big blow for Mount St. John stud in Great Britain. They lost their 8-year old top broodmare and sport horse, Mount St. John Best of All (by Bordeaux x Sir Donnerhall x Don Schufro), who is the maternal half sister to the Oldenburg licensing champion For Romance and Bundeschampion and PSI Auction price highlight Fasine. Purchased by Blundell at the 2012 AOS Auction in Muhlen, Germany, Best of All most likely ate poisonous berries and developed a severe colic. Despite an operation and professional medical care for two weeks, the mare could not be saved. "Having owned her from 2 years old, Bestie was my up and coming horse to replace Keystone Diaz who retired earlier this year," said owner Emma Blundell. "She was now showing huge talent with her pi/pa work for the future. Alongside this although being notoriously difficult to get in foal she was our most sought after broodmare with 3 elite offspring born by embryo transfer all sold to wonderful international homes who we know will do her very proud. Bestie was a very special one and will be hugely missed by all the team." Very Keen, the winner of the 2012 Louisdor Cup for Developing Grand Prix horses in Germany, has passed away. The 16-year old Dutch warmblood gelding by Oklund x Dutchboy had sold to Canada to Vicky Lavoie, but was put down a while ago. Under German Thomas Wagner, Very Keen won the 2012 Louisdor Cup and then made his international Grand Prix debut in 2013. The bay gelding did not show at all in 2016 and briefly returned to the CDI arena under Betina Jaeger at the CDI Herning in March 2017. Through Helgstrand Dressage the gelding sold to Canada as a Grand Prix schoolmaster for Lavoie.  “Sadly, we had to put Very Keen down, so I went back to Europe this summer because I needed another Grand Prix horse,” explained Lavoie, who ended up buying Fine Spirit.

Isabell Werth speaking on the importance of the Grand Prix Special at the CDI-W Stuttgart: "I think it is our task to support the classical tour. Of course the music in the freestyle contributes its part to thrill the audience, but if the horses are still nervous in the arena with music and amplified sound, than it is riding on the edge. I consider the Special in interaction with the freestyle as very important, moreover because the Special still is the clear sportive comparison; there’s no doubt about that."