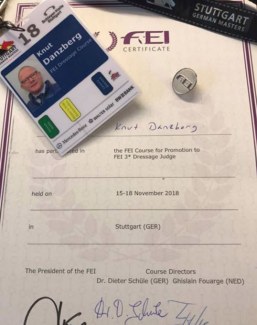 Thirteen dressage judges have passed the FEI judging exam that was held at the 2018 CDI-W Stuttgart for their promotion to either 3* or 4* level.

The CDI-W Stuttgart is returning venue where judges can do their FEI judges exam for promotion.

Judges from Canada, Czech, Germany, Great Britain, India, Portugal, Sweden and the U.S.A. attended the exam at the World Cup qualifier on on 15 - 18 November 2018.

The examination included a written exam with questions about the theory and rules of dressage judging, followed by a day of shadow judging. The candidates also had to do a personal interview with course directors Dieter Schüle and Ghislain Fouarge.

The following judges have been promoted to 3* level as of 1 January 2019:

The following judges have been promoted to 4* level as of 1 January 2019: