Christoph Hess: "The New Shortened Grand Prix Test is a Step in the Wrong Direction" 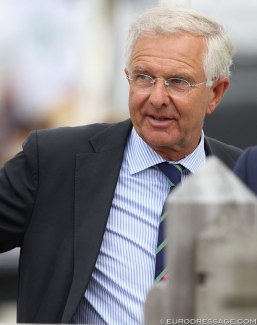 For 67-year old dressage judge Christoph Hess the pilot project of testing a new, shortened Grand Prix test at the 2018 CDI-W London next week, is a step in the wrong direction.

In an interview with German journalist Dieter Ludwig, Hess voiced his opinion against the test project as it eliminates essential movements (halt-rein back, shorter walk) that test the ultimate goal of dressage: the throughness, relaxation, and harmony in a combination, in favour of pleasing the crowds and television.

"The elements that test the correctness of the basic training can never be sacrificed so that the test gets shorter," Hess stated. "Still I think that we should create several different Grand Prix tests for the riders in the future. In show jumping, not every Sunday the same lines are ridden at Grand Prix."

Christine Stuckelberger recently commented that judges highly reward and even over-score circus piaffe and passage on completely tense horses. She thinks that horses which are not through should not earn medals at Championships.

Hess stated that he agrees with Christine's opinion. "Because judges have the task to down score tense horses, it's important that the rein back, the walk and also the walk pirouettes are asked. In these movements in this gaits, the judges can acknowledge whether the rider and horse are on the right path of training."

Hess stated that "I don't agree to the the statement that the judging has got worse. Horses have become considerably better, but are often more difficult to handle as the horses in the past. In past years horses that were strong in the poll were often unrideable and were not light on the bit, but they were willing still. Nowadays many horses have a lot of go and are light in the head-neck. The result is that they are often tight in the throat latch and don't pull enough on the bit. Those who want to be successful on these excellent breeding products have to sit balanced and relaxed and drive with the seat. This is a real challenge that we trainers face today."

Ludwig also asked what Hess' opinion is on how riders can defend themselves from many unfounded attack on animal abuse based on unflattering photos taken in the warm-up ring at international competition.

Hess' reply: "good equitation according to the anatomy of the horse and 'correct' riding is the best thing a rider can do to prevent such allegations. That riders cannot fully prevent such allegations is part of the sport of our time and social media which makes it easy for keyboard crusadors to critique. I recommend two things to the riders: don't avoid a conversation and explain why you ask certain things from your horse. However, they also need to be open to self-criticism, especially when they over-asked their horse. We as riders will always do things wrong, over-ask our horses, and choose wrong training systems. We have to stand up to this and always try to improve ourselves as riders, no matter at which level."

Hess' ideal Grand Prix test would include the traditional Grand Prix movements as well as a giving of the rein on a circle and "uberstreichen" in the extended trot and canter.