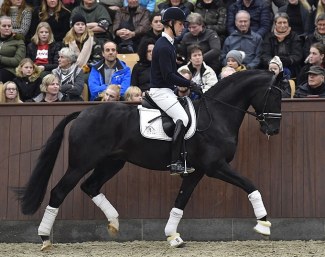 Kingston was licensed at the 2018 KWPN Stallion Licensing last February.  The black stallion did his 50-day stallion performance test in the autumn and finished with the second highest score of 85.5 points.  He earned 8.5 for walk, trot, canter, suppleness, balance and self carriage, 9 for rideability and 8.5 for potential as a dressage horse.

After his successful completion of the performance test, the KWPN society renamed the stallion "King" but Blue Hors stud bought him and have named him Blue Hors Kingston, respecting the horse's original name.

Daniel Bachmann Andersen has taken over the ride on the black. To German equestrian magazine St. Georg, he said "I have never ridden such a rideable 3-year old."