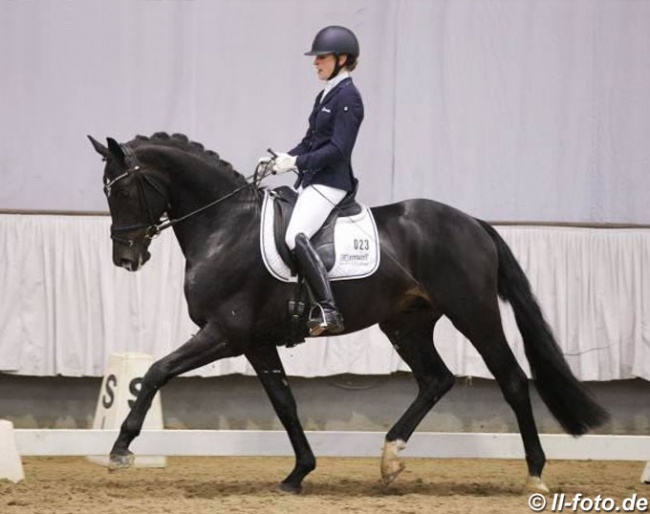 The 4-year old Gaitano and the 5-year old Jovian became the high scorers at the 2019 Stallion Sport Test in Munster-Handorf on 4 - 6 February 2019.

The stallion sport test is a mandatory test for licensed breeding stallions to keep their licensed status. It consists of several phases over three days including a presentation under the rider, the execution of a riding horse test and on the last days the quality of the gaits and rideability are being assessed by test rider Philip Hess.

The sport test in Munster was the first of 2019 for dressage horses and boasted a spectacular field of young colts. Several of them did not make the cut

In the 4-year old division 24 stallions participated and 23 concluded the 3-day testing. The relatively unknown black Oldenburg bred Gaitano (by Goldberg x Rohdiamant) finished at the top of the board with the highest score of 8.61. Presented by Beatrice Buchwald and owned by Australian Karen O' Callaghan, Gaitano received 9 for walk, 8 for trot, 8.2 for canter, 9 for rideability and 8.7 for general impression.

Buchwald's second ride in the testing, the Hanoverian Dancelli (by Dante Weltino x Baroncelli) was the second best scoring stallion at the test. He earned a total of 8.46 points, after receiving 8.3 for walk, 8 for trot, 9 for canter, 8.5 for rideability and general impression. The American owned Hanoverian Escamillo (by Escolar x Rohdiamant) was the third best scorer with a total of 8.38 points. He was presented by Timo Kolbe.

Three 4-year olds failed the testing: the Trakehner Sir Picasso (by Distelzar), the Oldenburger Sezarion (by Sezuan) and the Hanoverian Dresscode (by De Niro).

In the 5-year old division, the KWPN bred Jovian (by Apache) was the top scorer of the test with a total of 9.08 points. Under Eva Möller the tall bay stallion, who is owned by Andreas Helgstrand and who finished second at the 2018 Pavo Cup finals, received 7.5 for walk, 9.5 for trot, canter and rideability and 9.3 for general impression. Jovian has a busy schedule ahead. Right after his presentation at the Schockemohle stallion show on Sunday 3 February, he began the 3-day sport test on Monday. Next Saturday he'll appear at the Hanoverian stallion in Verden.

The second best scoring 5-year old was also ridden by Eva Möller: the Australian owned Dante Quando (by Dante Weltino x Fidertanz). He received 8.5 for walk, 8.2 for trot, 8.0 for canter, and 8.3 for rideability and general impression to total 8.26 points.  The third best scoring stallion was Gut Staffelde's black Meridian (by Millennium). He finished with 8.19 points.

Twelve 5-year olds participated in the test, two dropped out for not being sound (Don Indigo, Zonith). All passed the testing, though Zarathustra MT (by Zonik) barely made it with his 7.54 point total (the minimum is 7.50).