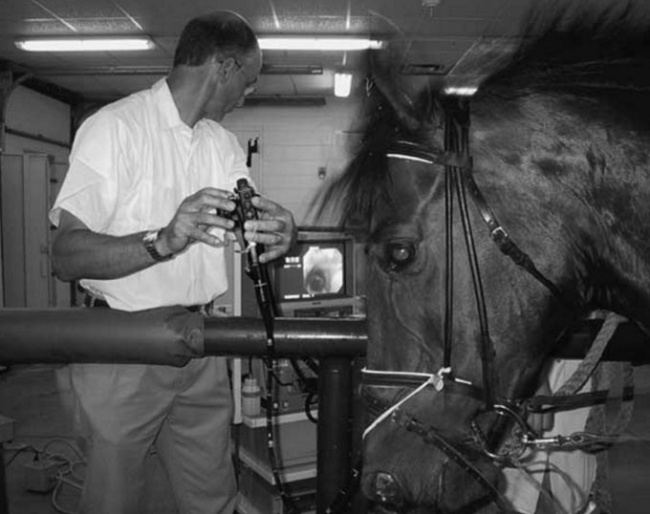 It has been suggested that the presence of a bit reflexly increases salivation but, at the same time, interferes with the horse's ability to swallow.

Researchers Hilary Clayton, Jane Manfredi and F. Derksen set out to compare the swallowing frequency in 12 horses exercising at canter while wearing a head collar, a bitless bridle, a jointed snaffle bit and a Myler correctional-ported barrel bit.

Bits have been used for many centuries to control the horse’s speed and direction of movement by exerting pressure on structures within the oral cavity and at various sites on the head. The horse’s response to, and acceptance of, the bit are important in some equestrian sports. In dressage, for example, one of the objectives is the acceptance of the bridle. Horses should chew gently, introducing air bubbles into the saliva, which makes it foamy. The presence of foamy saliva on the lips is regarded favourably by dressage trainers as a sign that the horse is accepting the bit in a relaxed manner, accompanied by salivation and chewing.

It has been proposed that the presence of a bit in the oral cavity triggers the parasympathetic nervous system to increase salivary output. Increased salivation is likely to increase swallowing, and during swallowing breathing is interrupted, making excessive swallowing during exercise undesirable. Furthermore, it has been suggested that a snafﬂe bit restrains the movement of the tongue, making it difﬁcult for the horse to swallow.

Reduced or ineffective swallowing could result in aspiration of saliva into the trachea during exercise. Accordingly, modern bit makers [1] have sought to design bits that allow greater freedom of the tongue. Others have proposed the use of bitless bridles that neither trigger salivation nor impede swallowing.

If the presence of a bit in the oral cavity induces excessive salivation, it might be expected that horses would feel a need to swallow more frequently when wearing a bit, but frequency of swallowing under different bitting conditions has not been investigated. Endoscopic visualization of deglutition has been described in humans and in horses, and the presence of an endoscope does not appear to hinder swallowing.

The Study and The Results

Laryngeal movements were recorded video-endoscopically as the horses cantered (8 m s 21) on a high speed treadmill, with the use of side reins to flex the poll. Swallowing was stimulated artificially by infusion of sterile water at a constant rate of 5 ml min 21 through a cannula in the endoscope's biopsy port.

Infusion of distilled water was used to ensure stimulation of the swallowing reﬂex under all conditions. The rate of infusion was established in a pilot study as sufﬁcient to induce swallowing but not great enough to cause distress.

Bitting has been proposed to increase salivation but saliva production during exercise has not been  measured. The fact that swallowing frequency did not increase when horses wore a bit argues against an increase in salivation. Horses competing in many equestrian sports are trained to perform with the poll strongly ﬂexed; greater ﬂexion (smaller angle between mandible and underside of the neck) may make it more difficult to swallow because compression of the pharynx and larynx hinders movement of the structures involved in swallowing. The reduced swallowing frequency with the Myler bit may have been due to physical interaction between the bit and the oral structures, leading to restriction of jaw or tongue motion, stimulation of sensory receptors that inhibited swallowing or reduction in salivation.

Since swallowing temporarily restricts a horse’s ability to brea the, frequent swallowing may not be desirable during athletic events. However, none of the horses in this study appeared to experience exercise intolerance secondary to a decrease in respiratory function because of swallowing. On the contrary, depression of the tongue, which may naturally occur with some bits, may stabilize the pharynx, allowing for better respiratory function.

It is concluded that the presence of a bit does not preclude swallowing during exercise at canter with the poll in a flexed position, but certain types of bits may be associated with a reduction in swallowing frequency.

Related Links
Judging Guidelines for the Evaluation of Pirouettes as well as Contact and Mouth problems
Noseband Special: Part II: The Purpose of the Noseband
On the Ignorance of Noseband Tightness and Vague FEI Noseband Rules
Bitless or Not, It’s About Having the Choice
Rein Tension with Bitless Bridles Compared to Single-Jointed Snaffle Bits