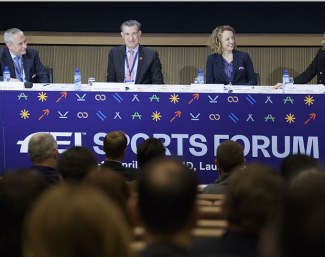 The eighth edition of the FEI Sports Forum, held at the IMD Business School in Lausanne (SUI) on 15-16 April 2019, attracted 265 delegates for a two-day programme covering a diverse array of topics.

The Forum began with a thought-provoking session dedicated to gender equality and female representation in governance-related positions (Committees, National Federations, etc.) and the benefits of diversity at the decision-making level.

The first session of the day was moderated by FEI President Ingmar De Vos with a specific focus on gender equality from a governance perspective and in the work place. Even though equestrian is the only Olympic and Paralympic sport in which men and women compete on equal terms at all levels, female representation in governance-related positions (Committees, NFs, etc.) can be improved.

The panel was made up of:

The FEI President opened the session by reminding the delegates about the recent update to the FEI Statutes, Art 2 which came into effect on 1 January 2019:

“The FEI shall encourage and support the promotion of gender equality in sport at all levels and in all structures with a view to implementing the principle of equality of men and women”.

He went on to explain that this shift and this session was part of a bigger process in the sports world to address gender equality at the decision making level and to actively encourage gender equality at all levels of the sport both on and off the field. He reiterated that National Federations have an important role to play within their own governance structures but also through the candidates they nominate for FEI Committees.

Each of the panellists then went on to present their insights and recommendations.

Caitlyn Kraft-Buchanan, Founder/Executive Director of Woman@The Table and Co-Founder of the International Gender Champions Network gave some background as to how she got involved in the gender equality movement and the purpose of these different initiatives. She went on to explain and provide examples of situations where gender diversity in the workplace and within teams had borne fruits providing a robustness to the decision making process thanks to the diversity and range of perspectives. She referred to the terms “hacks”, and how gender equality could be achieved through “hacks to the system” which basically entailed small changes to existing structures which allow and encourage gender equality. “Diversity brings you a perspective that brings strength.”

Sabrina Ibáñez, FEI Secretary General, President APSO and member of the IOC Gender Equality Working Group shared relevant gender equality statistics from the international equestrian sports scene showing that on many fronts, the sport is a leader in this domain, but nevertheless, when it comes to governance there were big improvements to be made but this was not uncommon in the sports world. “NOC’S, IF’s all struggle with gender equality on boards and committees. IF’s with gender equality on boards have 70% higher success rate.” .

Mohamed Elsarky, Chairman of the British Equestrian Federation talked about the Diversity Action Plan which was launched in 2017 and the progress the British Federation and all their members had made following the establishment of clear objectives and targets. He emphasised how important it was to have a clear line of sight with strong leadership to drive change and overcome the gender bias which affects workplaces. He reiterated the need for communication, collaboration and shared goals with a common mind-set about the aims and objectives.

The first question from the floor came from Danish Equestrian Federation President Ulf Helgstrand: “Since when is gender more important that competence? To which Caitlin responded: “Never, it is always competence first. There are many qualified women who don’t get the opportunity because the system is against them we need to address the imbalance in the right way.”

Caitlyn concluded with a question to the audience asking them to think about what are the structural impediments to gender equality in their organisations and what structural hacks or tools could be implemented to balance the playing field?