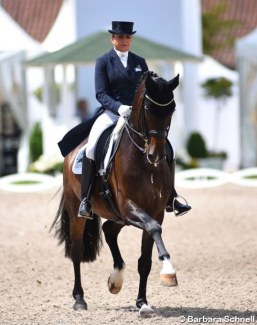 Dorothee Schneider and her 2016 Rio Olympic mount Showtime put on a show and grabbed the gold medal at the 2019 German Dressage Championships in Balve, Germany, on Saturday 15 June 2019. Silver went to Isabell Werth, not on comeback kid Bella Rose but with Emilio, while Jessica von Bredow earned bronze.

The German Championships are hosted annually at Count von Landsberg Velen's castle, but unfortunately the dressage arena is robbed of any character with its white tent-encampment. The shiny tents robs the venue of charisma and decor. Only a small group of professionals competes in the Grand Prix Championships. This year they were with just a 13 in the Grand Prix.

The 2019 German Championships were the big come back show of Isabell Werth with her 2018 world champion Bella Rose. The 15-year old Westfalian mare (by Belissimo M x Cacir AA) has not been out to a show since the World Equestrian Games in Tryon and came back to Balve looking fresh and fit and better muscled. The pair won the Grand Prix with 81.780%, but they had Dorothee Schneider and Showtime breathing down their neck in second place on 81.100%.

The first set of medals was decided in the Grand Prix Special. In this class the tables were turned and Schneider persevered on Gabriele Kippert's 13-year old Showtime (by Sandro Hit x Rotspon). The duo aced the class with 80.745% for the gold medal despite a mistake in the canter strike off from passage, while Werth and her second horse Emilio, a 13-year old Westfalian by Ehrenpreis x Cacir AA, landed second place with 79.647% for silver. Bella Rose dropped to fourth place on 79.471% after there was a bobble in the canter strike off from passage. In addition Werth went off course and rode two tempi changes instead of canter half passes.

Jessica von Bredow-Werndl and Beatrice Burchler-Keller's 12-year old Trakehner mare Dalera BB (by Easy Game x Handryk) were very consistent with a third place in the Grand Prix (78.880%) and a third in the Special on 79.588% for the bronze medal.

This is Schneider's second German Champion's title. In 2017 she won Kur gold at the Nationals.

Biggest absentee at the Nationals is Sönke Rothenberger and Cosmo. The pair had traveled to Balve but Cosmo developed colic signs and was taken to the equine clinic as a pre-caution.