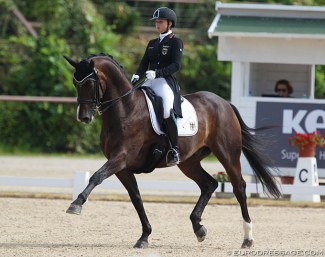 German team reserve Jana Schrodter received a surprise phone call from her national federation last week that she was called to substitute for Lucie-Anouk Baumgurtel on the German junior riders' team for the 2019 European Youth Riders Championships in San Giovanni in Marignano, Italy, on 24 - 28 July 2019.

After some quick organisation and last minute packing the German team reserve was on her way south from Wuppertal to sunny Italy and what a trip it has been!

Schröidter and her 11-year old Der Erbe (by Dimaggio x De Niro) won team gold on Thursday after posting the second best result in the team test of 76.303%.  In the Individual test, which counted for a first set of individual medals, Schrödter upped the ante and became the high scorer to win the gold medal and her first individual European Champion's title.

Schrödter drew a starting spot in group two for the individual test and produced a ride that convinced with nice extended trots and solid traversal movements. Overall the horse was slightly behind the vertical and the silhouette would improve much with him having the nose more out so he would use his back more. The right turn on the haunches was good, the left one needed more impulsion. Der Erbe has very good balance in canter and showed uphill flying changes, but his walk got short in the simple change. The extended canter right was a bit wild, but a big flying change followed and Schrödter rode onto the centerline for a final halt and salute that granted her gold.

Four out of five judges placed the pair first, but the individual marks ranged from 75.588 to a massive 79.706%

While Schrödter got gold, the top honour could easily have gone to Dutch duo Marten Luiten and the 9-year old Dutch mare Fynona (by Ampere x Gribaldi). The trot work was very rhythmical with sweeping half passes that were well cadenced. The extended trots had much overtrack but Fynona is not really elastic over the back. The extended walk had a fantastic cleart 4-beat rhythm, but the collected walk was too free in the frame and looked more like a medium walk. In canter the flying changes to the left are straighter and better than to the right. In the right extended canter the horse lost the 3-beat rhythm and became a bit rigid in the back, which led to an unscripted flying change. Marten quickly recovered, changed back and was able to ride a correct flying change on the marker before the corner. Luiten produced a very strong test with room for more if his horse were to have his nose more out instead of being consistently too tight in the neck. Fortunately the contact was soft and steady. They scored a well earned 75.588% with marks going from 74.412 to 77.353%.

The bronze medal went to last year's European double silver medal winner Valentina Pistner on her 11-year old Oldenburg gelding Flamboyant (by Fidertanz x De Niro). The pair began with a strong halt at entry and showed much bounce in the extended trot. The tall black Flamboyant stays in the favour of the judges and scores such high marks because of his three ground covering basic gaits. In trot he is very cadenced and has much suspension. He has a brilliant extended walk that could easily earn him a 10, and the canter work is scopey. Today Pistner was not really able to bring the proper lightness in riding though. Her rein aids were visible and her hands often moved over the withers. She also leaned back in the saddle and in the canter the gelding gets too long in the frame and croup high. Nevertheless, he showed big sweeping flying changes, although the fourth one was in two phases. The simple change had a bit of an abrupt double beat behind in the transition to walk, but the final halt was there. They scored 74.794% for third place and the bronze medal,  but the marks ranged from 72.206% to 76.765%.

German team mate Anna Middelberg and her 8-year old Hanoverian Blickfang HC (by Belissimo M x Brentano II) might not show the same scope in gaits as Flamboyant does, but the pair produced wonderful work that could easily have earned them the bronze too. The beautiful liver chestnut showed an excellent halt at entry and a very cadenced trot, but when he was given the reins in trot, he could stretch the nose more out. The half pass left could have had more crossing of the legs  but the half pass right was better. Blickfang was very steady in the bridle and Middelberg kept her hands quiet. The extended walk was good, the collected a bit slow and hesitant in the right turn on the haunches. The flying changes to the left were straight, but the the right they became a bit crooked. The last one was in two phases. With 73.059% they landed fourth place, just missing out on a podium spot. The individual marks went from 70.882 to 75.735%.

Dutch Annemijn Boogaard and the 9-year old Dutch gelding Fullspeed TC (by Ziesto x Contango) completed the top five. The pair was the second to go on Thursday morning and became the overnight leaders in the ranking. Their trot had much forward energy but in the traversal movements the gelding could show a bit more elasticity and flexion in the ribcage. The horse stays a bit straight in the topline instead of really swinging over the back. The extended walk had two hooves overtrack and the flying changes were well ridden and straight. The extended canter was powerful but the horse needs to climb more and in the simple change he lost the impulsion. Dutch team newcomer Boogaard put down an appealing test that launched her to fifth place out of 78 pairs with 72.118%.