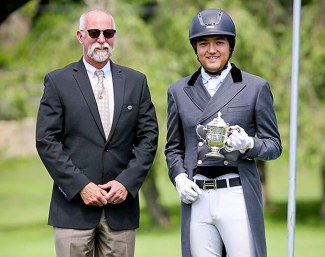 Maldonado Lara was the sole Mexican dressage rider competing at the NAYC.

Aboard the 18-year old Dutch warmblood Massimo (by Jasper x Prestige Forever) he finished 10th in the team championship test, 19th in the individual test and 16th in the Kur to Music/

Each year at NAYC, the Captain Andrew B. de Szinay Memorial Sportsman Trophy is given to the athlete across all disciplines who best personifies the high standards and virtues of integrity, sportsmanship, honor, courage, team spirit, good temper and unselfishness. This award is presented annually by the U.S. Equestrian Federation in honor of Captain Andrew B. de Szinay who was a teacher, dressage judge, technical delegate and long-time supporter of the Young Rider’s program. His dedication and support has helped the championships become what it is today.