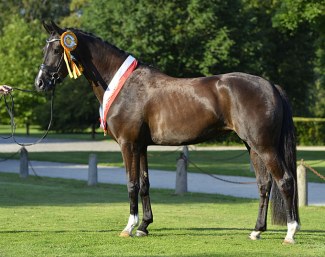 These four exceptionally beautiful and functional young dressage mares made up a very interesting final and made it hard for the judges to make their final decision as the mares, despite their differences, are of equally high quality and all of them out of strong performance dam lines.

The champion Atterupgaards Lady Hamilton the judges described as a feminine, expressive and extremely pretty mare with a very supple topline. She has an excellent trot and canter, and she radiates rideability and capacity.

Eight mares got the silver medal and fifteen the bronze medal.

The Danish warmblood elite mare show also holds a 2-year old championships with 16 fillies making it to Vilhelmsborg. Six were selected for the champion's ring and the winner was Francisca (by Franklin x Romanov)

Bred by Henrik Hansen, Francisca was described the judges as a well-developed and noble filly of outstanding type and with great expression in all three paces. Her walk is rhythmic, the trot is excellent with very active hindlegs and uphill tendency whilst the canter is ground covering and good impulsion.

For breeder Hansen it was a great success in Vilhelmsborg as he also bred the 2019 Danish Warmblood Jumper Foal Championa and two years ago he had the 2017 Danish Filly Foal Champion in Faretti (by Franklin x Don Frederico).