Where are They Now? Scara Boa 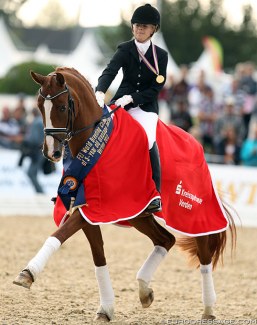 At the 2013 World Championships for young dressage horses, German Lena Stegemann won the 5-year old division aboard the Hanoverian mare Scara Boa. The chestnut was not the flashiest mover, but beautifully ridden by Stegemann and scored top marks to take the title.

Since the 2013 World Championships Scara Boa completely disappeared from the scene. Let's see where she is.

Scara Boa is born in 2008 and is by Scolari out of Worita (by Wolkenstein II x Gardeulan). She is bred by Rixta Stolter.

Owned by stallion keeper Ingo Pape, the mare first made the spotlight as a 3-year old when she earned the state premium title at the 2011 Hanoverian Elite Mare Show (Herwart von der Decken) in Verden.

She was first competed by Alina Stolter in 2012 at A-level and in the summer Susan Pape took over for the 2012 Hanoverian Young Horse Championships, where she finished fifth. At the 2012 Bundeschampionate in Warendorf, she placed sixth in the 4-year old riding horse class for mares and geldings.

In 2013 Pape's assistant trainer Lena Stegemann climbed on board and after warming up at local shows in Fredenbeck, Bremen and Hamburg, the duo qualified to represent Germany at the World Young Horse Championships in Verden.  At the prestigious Championships, they won the preliminary test with 9.62 points.

In the WCYH Finals the pair won title and gold medal with 9.60 points. The judges rewarded Scara Boa with 9.5 for trot, 9.7 for walk, 9.0 for canter, 10 for submission and 9.8 for general impression.

Since the World Championships, the mare disappeared from the international scene.

Where Is She Now?

It took four years for Scara Boa to return to the show ring. In 2017 Susan Pape rode her at two events. In April 2017 at Osterholz Scharmbeck and in May in the Lübeck Nurnberger Burgpokal qualifier for developing Prix St Georges horses, in which she finished sixth. Unfortunately injury has prevented the mare from staying in sport and she is now a broodmare, with success!

Five embryos have already been flushed from her, so far. The first foal was born in 2015 (by Scuderia) and she is now a broodmare herself. The 2016 colt by Don Nobless went on to be approved at the 2018 Westfalian Stallion Licensing in Munster-Handorf and was auctioned for  58,000 euro.

"Unfortunately Scara Boa injured herself and we decided that she carries out a foal herself for 2020," Ingo Pape told Eurodressage. "She is currently in foal to Despacito."