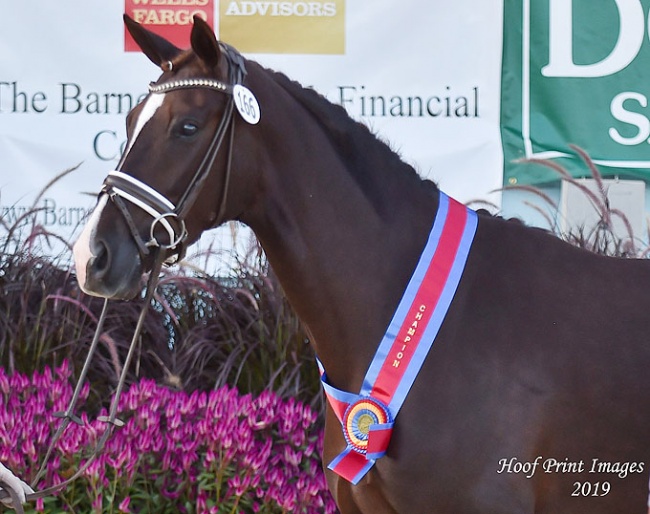 Devon hosts one of the biggest annual sport horse breeding shows in the U.S.A. and takes place over three days before the international dressage competition in Devon, PA, U.S.A.

The Devon breed show takes three days and includes breed classes but also under saddle materiale classes. The horses are divided into classes by breed, but also by age.

The Grand Championship is the culmination of the show, bringing together the champion and reserve champions of the two biggest classes: The Young Horse and Mature Horse Championship.

Mature Horses in the Spotlight

The Mature Horse Championship included the top two of the Mare and Stallion Championship, but it was won by Scantolina and had Sophistokate as runner-up.

This is the second year in a row that Alice Tarjan had the Devon Grand Champion. In 2018 her Oldenburg bred Summersby II (by Sezuan x Sandro Hit) won the title. Alice bred Gjenganger herself in the U.S.A. selecting Grand Galaxy Win as a sire and putting him to her Danish warmblood mare Donna Dee (by Don Schufro), which Tarjan bought from Danish Vicki Nedergaard after seeing Donne Dee advertised for sale on Eurodressage.

"I can’t believe we won it two years in a row! I was completely surprised and not expecting it, I just wanted to get her out a little for the experience. I’m thrilled," Tarjan told Eurodressage. "She will probably do young horse (classes) next year."