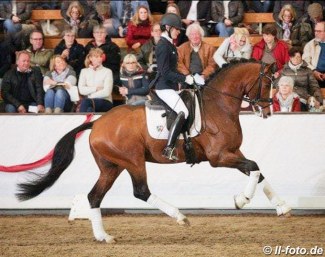 Zoom is a 5-year old Hanoverian registered stallion by Zack out of Diva Dannebrog (by Don Schufro x Brentano II).

Zoom has only been very lightly competed in his career. In 2017 he was shown by Jessica Lynn Thoman (née Andersson) just twice. He won a local show in Mettingen and placed fourth at the 2017 Hanoverian Young Horse Championships in Verden. In 2018 he did not compete at all.

At the beginning of 2019 Warendorf state stud director Kristina Ankerhold allocated the ride to Beatrice Buchwald and the bay stallion moved to her barn while he continued to breed.

Zoom did just two shows with Buchwald: a local event in Bottrop, which he won, and the Bundeschampionate qualifier in Wipperfurth, where he placed second and qualified for Warendorf. This show on 1 May 2019 was his last. Zoom did not compete at the 2019 Bundeschampionate at the beginning of September.

Zoom already left Buchwald's stable back in August and briefly returned to Warendorf. Ankerhold has now made an agreement with Helen Langehanenberg for his further training.

"We couldn't find an agreement with Mrs Ankerhold about the breeding conditions," Buchwald told ST. Georg. "When it concerns the training and show planning the collaboration was very uncomplicated. However with the breeding business we've tried it for a year and concluded that for us it doesn't add up."