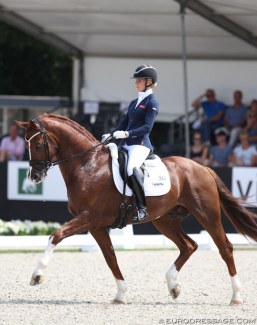 The 6-year old Oldenburg breeding stallion Ibiza has made his come back to the show arena after a one-year break from competition.

Ibiza is a KWPN bred stallion by Desperado x Jazz x Contango. He is bred by Luc Boogert.

He sold as a foal for 72,000 euro at the 2013 Midden-Nederland Foal Auction to Jan Vink. He was licensed at the 2015 Oldenburg Stallion licensing in Vechta, where he sold at auction for 170,000 euro to German Vasco Janke.

Ibiza did his 14-day Stallion Suitability Test in Adelheidsdorf in the spring of 2016 and scored 8.0. At the 2017 German Stallion Sport Test in Munster, he got 8.73 points.  In 2017 Janke moved Ibiza in training with Emmelie Scholtens for him to be competed in the 2017 Pavo Cup, in which he finished fifth in the finals. He also competed in the first qualifier of the 2017-2018 KWPN Stallion Competition circuit, but the stallion bit his tongue and was excused from the test. He never competed again on the KWPN stallion competition circuit.

Juliane Burfeind (née Brunkhorst) took over the ride in 2018 and via the Dutch WCYH selection trials she qualified him for the 2018 World Young Horse Championships in Ermelo, where they finished 6th in the Finals.

Ibiza has not been out to a competition since then.

"After 2018, when Ibiza did a super job, we decided as a team that the effort is out of proportion (to qualify for Ermelo 2019)," Burfeind told Eurodressage. "In Holland they have 5 preselections and each one means 12 hours on the truck for Ibiza. We are focused on long term equine education to train him up to Grand Prix level. I'm so happy that the owner and I are completely of the same mind - the well-being of Ibiza always takes priority."

Ibiza was also not trailered to any local, regional or national shows in Germany this year. After a 13-month show break he made his come back last weekend in Medingen where he won an M-level dressage horse test.