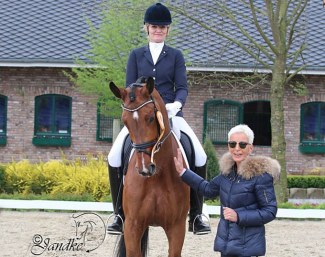 German dressage rider and trainer Mirja Block has lost a part of a finger in a horse accident at her stable.

Block was walking a horse in hand, when suddenly it spooked and the lead rope got caugh around Block's hand, cutting off a part of her finger.

Mirja, better known as Mimi, went to the hospital, where the piece was reattached to her hand at a hospital in Cologne. Since then Block has underwent two more operations to her hand which kept her five weeks off horses.

Block, who is originally from Aach, Germany and who was based in the U.S.A. between 2000 and 2006. In this period she was active in the international show arena.

Since Block's return to Germany in 2007, she has not competed at any CDI's. She has been working as a professional rider for Johanna Sahle, she stepped in for Katrin Burger in 2017, when Burger left the Merkt family. She has also worked for horse dealer Arnold Winter and Gestut Sprehe's Sabine Rüben. She is now freelancing at a yard in Leverkusen.

In 2019 Mimi has focused on competing Arnold Winter's 9-year old Czech warmblood mare Marcella (by Workington x Hochadel) at developing PSG horse level. There were no shows in 2018, but in 2017 she actively campaigned FBS Sir Solitär, Frizzantino, Deliza, Frau Holle, and Vernissage amongst others in Germany.

Block was one of the youngest riders in Germany at the time to achieve the Golden Rider Badge. She did at age 16.